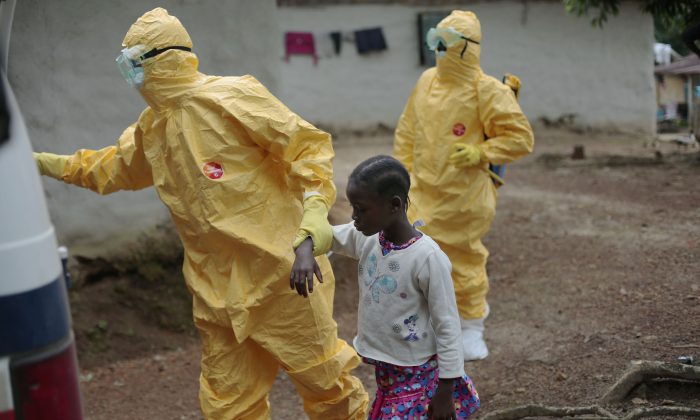 Nowa Paye, 9, is taken to an ambulance after showing signs of Ebola infection in the village of Freeman Reserve, about 30 miles north of Monrovia, Liberia, Tuesday Sept. 30, 2014. Three members of District 13 ambulance service travelled to the village to pickup six suspected Ebola sufferers that had been quarantined Six months into the worlds worst-ever Ebola outbreak, and the first to happen in an unprepared West Africa, the gap between what has been sent by other countries and private groups and what is desperately needed is huge. Even as countries try to marshal more resources to close the gap, those needs threaten to become much greater, and possibly even insurmountable. (AP Photo/Jerome Delay)
Ebola

Ebola Zombies? ‘Rise from the Dead’ Article Keeps Going; And Another One Claims a 3rd Person Resurrected; All Likely False

An article claiming reports on “Ebola zombies” is likely false.

The original article was posted on the Liberia-based newspaper The New Dawn but it appears to have taken on a new life on social media websites–especially in the wake of the CDC confirming the first case of Ebola in the US.

“Two Ebola patients, who died of the virus in separate communities in Nimba County have reportedly resurrected in the county. The victims, both females, believed to be in their 60s and 40s respectively, died of the Ebola virus recently in Hope Village Community and the Catholic Community in Ganta, Nimba,” the New Dawn writes.

However, there’s no other media reports on the matter and it appears unsubstantiated.

On Sept. 30, another article was published on what appears to be a conservative blog (which is currently down), claiming that a third person rose from the dead, according to hoax-debunking site Snopes.com,

“No corroborating reports of Ebola resurrections have surfaced since the initial story was published in Liberia, and no details have emerged to clarify the circumstances under which the patients ‘died,'” Snopes says.

Snopes adds: “On 30 September, the ‘Ebola zombie’ rumor was resurrected with a post suggesting that a third victim of the disease had mysteriously reanimated. However, the site from which the image and story originated is satirical in nature.”

On Twitter and other social media websites, the likely false reports about zombies has gone viral.

“Ebola turnin people into zombies. The worlds so [expletive] its incredible,” one person tweeted Wednesday.

Added another: “Ebola is causing zombies to come alive,” with accompanying unhappy-face emojis.

“If there’s really zombies from the Ebola disease,” another wrote.