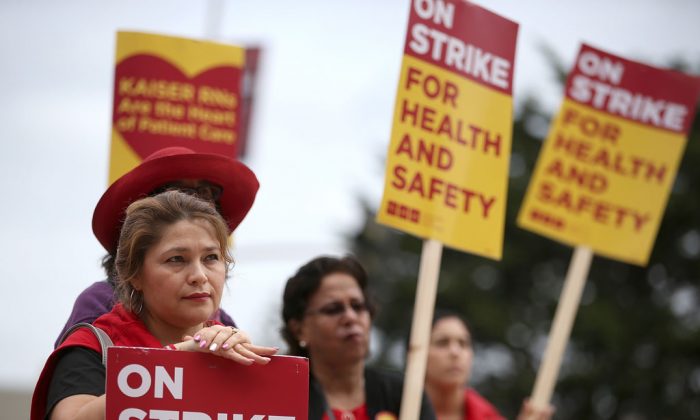 Despite reports that the number of infections is slowing in some parts of West Africa, cases still are rising in other areas — and aid organizations say thousands of health care workers are needed to treat Ebola over the next few months.

“We’re not yet at a point where we can have confidence that we’re turning the corner, even in Liberia,” said Andy Gleadle of the International Medical Corps, which is running a treatment center in Liberia and plans to open another in that country and two more in Sierra Leone.

Even with increasing global attention to the epidemic, it takes time to train new health workers, build field hospitals, and buy protective equipment for doctors and nurses.

“Let’s say President Obama gives us another $5 million tomorrow morning — which would be very nice, thank you — but it takes weeks to absorb that funding and implement it on the ground,” added Gleadle, who is responsible for the charity’s response in Sierra Leone.

On Wednesday, the Senate Appropriations Committee is set to question Obama administration officials about the U.S. response to the Ebola outbreak as it begins evaluating the emergency aid request. It includes $4.64 billion in immediate spending to fight the epidemic in West Africa, shore up U.S. preparedness, and speed the development and testing of Ebola vaccines and treatments.

More than $1.5 billion would be for a contingency fund to deal with any unexpected developments.

Shortly before the hearing started, Army Maj. Gen. Gary Voleski said the U.S. military’s Ebolaresponse in Liberia will top out at 3,000 troops, 1,000 fewer than had been planned. “There is a lot of capacity here that we didn’t know about before,” he said.

The World Health Organization reported Wednesday that more than 5,000 people had died in theEbola outbreak.

Money won’t solve everything, said Benoit Carpentier, a spokesman with the International Federation of the Red Cross, whose teams are carrying out safe burials and running a treatment center. Time might be the scarcest resource now, he said: Time to reach remote villages and explain how the virus is transmitted, time to persuade people to change their behaviors so they don’t spread the disease, time to track down people who have come in contact with the sick. It’s difficult for health workers and others to keep up.

“The situation does change quite dramatically from one day to the next, one week to the next,” Dr. Tom Frieden, director of the Centers for Disease Control and Prevention, told The Associated Press.

Cases continue to pop up in new areas across the three hard-hit West African countries of Liberia, Sierra Leone and Guinea, he said.

“The challenges are really daunting, and one of the critical needs is for speed and flexibility” as those clusters emerge, Frieden said.

There currently are no reported Ebola cases in the U.S.

There’s bipartisan concern about Ebola and its threat to the U.S., and support for military and public health efforts at fighting the epidemic in West Africa. But Republicans have been critical of the Obama administration’s security measures at home and how it has helped states and hospitals prepare for cases since Liberian visitor Thomas Eric Duncan became the first Ebola patient diagnosed in the U.S. He died in Dallas; two nurses who treated him became infected but recovered.

Sen. Chris Coons of Delaware, a Democrat on the Appropriations Committee, said he’s optimistic the spending package will pass quickly, and hopes it won’t get delayed by debate over such things as travel bans.

“We need to keep on this task and to keep supporting” the military, government health workersand volunteers abroad while at the same time “making sure the United States has the resources and preparation and ability to keep us safe at home,” he said.

Among the proposed spending: