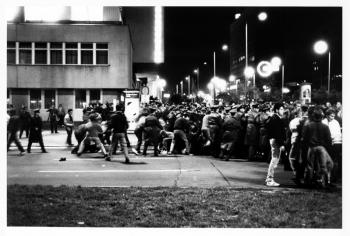 Two men, two paths—even though many aspects of their lives are different, both men, due to their backgrounds and consciences, experienced the pain of extreme measures of deprivation, intimidation and ostracism. This two-part article will explore what these men both experienced in their life: a suppressive political system influenced their future.

Horst Pfeiffer, born in1956, was a production worker in the Cottbus textile factory. He frequently questioned the operational procedures there, and thought them to be too far away from democratic decision-making processes. During one meeting, he posited the questions: “why are the department heads not directly elected by the work team?” and “why vote, if there is only one candidate?”

In fact, Article 2 of the Constitution of 1974 of the German Democratic Republic (GDR) clearly stated that:

"All political power in the German Democratic Republic is exerted by the workers of city and country. Humans are at the center of all efforts of the socialist society and its state. The further advancement of the material and cultural progress of the people is based on a high rate of development of socialist productivity, with its continued growth and effectiveness. Scientific-technologic progress and the growth of productivity is the crucial task of the developed socialist society.”

Furthermore, “The firm alliance of the working class with the class of cooperative farmers, the members of the intelligentsia and the other strata of the people, the socialist property gained through means of production, the schema and guidance of social development, after the most advanced recognition of science, form the inviolable foundation of the socialist social order.”

Reality, however, was a far cry off, completely disconnected from these directives. This disconnectedness was what Pfeiffer chose to address.

Imprisoned in the Notorious Bautzen I –The ‘Yellow Misery’

Pfeiffer was taken aside for his comments, and was warned that his behavior could result in criminal prosecution: he ran the risk of incurring a prison sentence. To avoid the possibility of being arrested, in June of 1980, he attempted to escape, through the border triangle, the shared border between the Czech Republic, Poland and Germany, located near Plauen, in Saxony. (The area is also infamously known as the “Black Triangle” region, due to the very high levels of industrial pollution here.)

He had plotted an escape route that would take him through the then Czechoslovak Socialist Republic (CSSR,) with a final destination of either Austria or the Federal Republic of Germany. He abandoned the thought of escaping through Berlin, as he believed the Berlin Wall, which divided east and west both physically and ideologically, was virtually impenetrable.

He was caught during his escape attempt, and after a short detention in Plauen, taken to the Cottbus penitentiary. After a two-month pre-trial confinement, during a secret trial he was convicted of trying to escape from the state, and found guilty of counter-revolutionary behavior. He was sentenced to a one-year prison term in Bautzen I and II, the notorious Stasi [GDR police] prisons. Known as “Yellow Misery and Stasi,” they had also served as notoriously brutal prisons for political prisoners during the Third Reich.

Bautzen I became known as “Yellow Misery” after completion of its construction, in the beginning of the last century. It was so named, due to the builder’s use of yellow brick for the walls. Bautzen I was already being used as a penitentiary for political prisoners during the time of National Socialism, the period when anti-semantic, anti-marxist and anti-democratic doctrine germinated and came to flourish during Hitler regime. During the final days of the GDR, 75 percent of the inmates of the prison were criminals, and the other 25 percent were political prisoners.

In June 1981, Pfeiffer was released from detention. His freedom, however, was restricted. He was not allowed to leave the Cottbus district for five years without special permission. He also was not issued a regular identification card.

Pfeiffer is certain that the detention conditions, with its varied discriminatory activities and practices of intimidation, ultimately achieved the opposite of what it intended. In his case, he became a civil rights activist.

Up to the end of October of 1989, Pfeiffer envisioned that the transformation of the GDR could occur through a peaceful revolution, which would transform the “State-GDR” into the “People’s-GDR.” In Pfeiffer’s eyes, a bourgeois counter-revolution was in the making. The situation was soon to turn 180 degrees. On October 7, the 40th anniversary of the founding of the GDR, he joined the 7 – 8,000 people that had chosen of their own volition to come to the Palace of the Republic, where they demanded co-determination and democratic freedom.

‘He who comes too late will be punished by life’

The coming of the fall of the Berlin Wall wasn’t Pfeifer’s first concern. The most popular slogan was becoming “Perestroika” [restructuring.] It became quite clear when listening to him that the people of the GDR, who longed for complete political change, had set all their hopes in Mikkhail Sergeyevich Gorbachev, the last General Secretary of the Communist Party of the Soviet Union. This desire for change became more intensified after the GDR supported the Chinese communist regime’s suppression of the June 4th Tiananmen Square massacre.  The Volkskammer [People’s Chamber] adopted a resolution stating that the GDR unequivocally supported the suppression of the “counter-revolutionary disturbances” in Beijing. Besides this resolution, high-level GDR officials published a number of documents supportive of the Chinese communist regime’s suppression.

Egon Krenz, a former representative, chairman of the Council of State and successor of Honecker, [Council of State chairman of the GDR from 1971 to 1989] described the Tiananmen Square massacre as: “measures taken to maintain order.” This remark, along with similar ones, infuriated GDR citizens who demanded change, and served as a interlude to a rapidly deteriorating situation.

The demonstrators became increasingly concerned with the reaction of the GDR regime, in the midst of more protests. Many of the GDR citizens looked to Moscow and the President of the Soviet Union for guidance. They increasingly found more signals surfacing that strengthened their stance, especially during Gorbachev’s visit to the GDR in October of 1889. It is not clear whether Gorbachev, on October 7, uttered the remark, “He who comes too late will be punished by life.” However, it is certain that Gorbachev said, “I think that danger awaits only those who will not react to live.” This was his key remark during a spontaneous interview in Berlin, with the ARD, a German television station, on October 6, 1989. Independent of any statements made by Gorbachev, it was clear that he supported peaceful reform in the GDR. Even more importantly, he initiated such talks with GDR officials.  At the same time, he made sure that the GDR officials understood that the USSR [Union of Soviet Socialists Republic] would stay aloof from any reform activities in the GDR, as long as they were peaceful. This clear message boosted the hopes and conviction of the people of the GDR, and accelerated the process of change.

Review of the End of the GDR

In reality, the end came very fast. In review, Pfeiffer views the time after Honecker’s resignation, from October 18 to December 1989, as the greatest period of time the GDR had ever experienced.

What offended Pfeiffer most about the GDR system was the contradiction between the political system’s theory and actual practice. On one hand, the people were promised “All power to the people!” and on the other, a small, elite group of functionaries determined what was right or wrong, and what was going to transpire in the GDR. Based on this experience, he regards any state system that establishes a hierarchy that does not have the best interests of the people in mind as a dictatorship. For him, solidarity among the people is one of the most important tenets of a society. In politics, he feels that openness and honesty must be put into practice, not just theories in writing.

Pfeiffer, now 52, is the father of two daughters, and lives with his wife in a small community in Brandenburg.  The visit to the CottbusBautzen, to help him move on from the past. Even today he still bears the scars of the deep wounds sustained from that past. He is certain that a similar angst still unsettles the minds of other former inmates who have endured similar experiences, under similar circumstances. prison grounds in June of this year was a steppingstone to the next step for him; a visit to the “Yellow Misery” Prison in

Raimund Anjust also “did time” at Cottbus. For his story, please see Part I of Two Lives – One Political System.

The town of Cottbus is located in Germany, on the river Spree. It is near eastern Europe, south of Brandenburg, in the German state of Prussia. The Cottbus prison is known as a “forgotten prison.” Such prisons mainly detained political prisoners, in the formerly communist state of the German Democratic Republic.