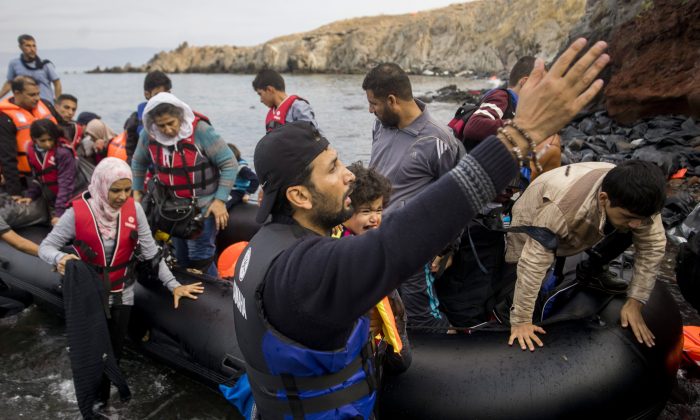 Migrants arrive with an overloaded rubber dinghy from Turkey on the coast of Lesbos island, Greece, Tuesday, Oct. 6, 2015. (Zoltan Balogh/MTI via AP)
Europe

BUDAPEST, Hungary— Several Eastern European countries are cooperating on controlling the flow of migrants at the external borders of the European Union — a program a top Hungarian official said Tuesday could set an example for the rest of the 28-nation bloc.

Zsolt Nemeth, head of the Hungarian parliament’s foreign relations committee, said his country is working jointly with the Czech Republic, Poland and Slovakia to help protect Hungary’s border with Croatia, which is also an external border for the EU’s passport-free Schengen travel zone.

“We want to return traffic at the external border to its normal course,” Nemeth told The Associated Press in an interview. “We want (migrants) to enter the Schengen zone only at the checkpoints.”

The Czech Republic on Monday decided to send 25 soldiers to Hungary to help protect its borders with Croatia and was considering sending more troops and police, while Poland’s Border Guard sent a helicopter with eight crew members and one liaison officer to Hungary.

On Thursday, the interior ministers of the Czech Republic, Slovakia and Poland will discuss further ways to help Hungary, which has seen over 318,000 people seeking safety arrive this year. The four countries form the so-called Visegrad Group.

Nemeth said Hungary wants to spur the EU into protecting the external borders of Greece, where most of the tens of thousands of migrants reaching Hungary first enter the EU.

“If we, the Visegrad Countries, can set an example for Europe, then there is a chance that the EU will follow this example,” Nemeth said. “We should defend the Greek border together.”

Hungary has built a razor-wire fence on its border with Serbia, which is not in the EU, and is rapidly completing a similar barrier on the Croatian border as well.