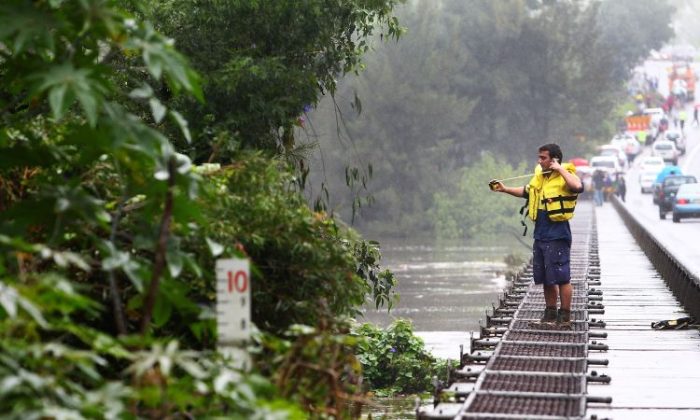 An emergency worker measures the height of the Hawkesbury River in Richmond, Australia, on March 3. (Marianna Massey/Getty Images)
World

Heavy rainfall and flooding in the past week have stretched emergency services across Australia’s eastern states. New South Wales (NSW) has evacuated thousands of residents, while Queensland braces for high winds and a possible cyclone. Victorian flood-waters are now receding.

The NSW Government has declared more than 35 local government areas disaster zones since the beginning of the year, and the State Emergency Service (SES) has performed at least 105 flood rescues, receiving more than 3000 calls for assistance.

More than 8,000 residents have been ordered to evacuate flood-stricken areas across NSW, with thousands of rural properties isolated in the waters.

The Murrumbidgee River, which flows through the Australian Capital Territory (ACT) and NSW, was expected to peak at a record 36.8 feet Tuesday afternoon in the western NSW town, Wagga Wagga, an increase on the Bureau of Meteorology’s estimated 32.8 feet peak forecast Sunday night.

“Our last flood was in December 2010–we got through that okay, but … this will be a lot worse,” Wagga Wagga mayor, Kerry Pascoe, told AAP.

The Bureau warned of flash flooding, and damaging winds peaking at 56 mph about the coast, islands, and nearby inland areas.

Meteorologist, Vikash Prasar, told AAP there was a 50 percent chance the low could develop into a cyclone off Fraser Island, around 90 miles from the state’s capital, Brisbane.

Towns in Northeast Victoria remain affected by floods, and the State Emergency Service says that in some places, the flooding has exceeded both 1974 and 1993 flood events.

More than 300,000 sandbags have been filled as a last line of defense in Northeast Victoria where several families may be isolated for days.

Floodwaters may take a little over a week to drain after the peak has passed, the SES said.

Canberra, the nation’s capital, has recorded its wettest week in more than 60 years, reaching nearly 8 inches at Canberra Airport during seven days up until Sunday. Canberra has now recorded just over half its average long-term annual rainfall in just over two months.

The ACT State Emergency Service received 941 calls for help over the past week.

The soggy summer is Australia’s second, extremely wet, summer in a row, with wet and cool conditions accompanied by heavy rains. The combined 2011 and 2012 years constitute the wettest two-year period in Australia’s history, a record previously held in 1973-1974. Queensland is still recovering from devastating floods that affected much of the state early last year.