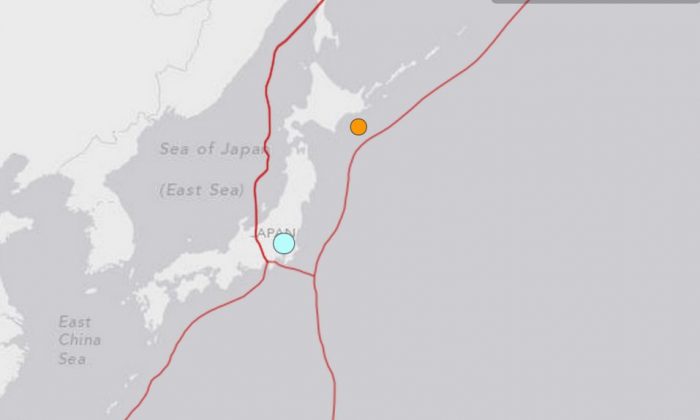 A strong earthquake has shaken Tokyo on Wednesday morning in Japan.

The US Geological Survey said that the quake was magnitude-5.6 on the Richter scale.

The quake had a depth of 33.5 miles and struck near Iwai, Sakai, Ishige, and about 27 miles from Tokyo.

The AFP news agency reported, via Twitter, that buildings were rocked by the quake.

There was no immediate tsunami threat issued.

The White House announced the move in a statement Thursday nine days after Gov. Jerry Brown sent a letter to Obama requesting the declaration. Brown declared a state of emergency for California shortly after the magnitude-6.0 earthquake on Aug. 24.

The White House didn’t say how much money may be available, but a preliminary assessment by the governor’s office found $87 million in earthquake costs that could be eligible for federal reimbursement.

Funds for emergency work and the repair or replacement of facilities damaged by the earthquake is available on a cost-sharing basis for the state along with some tribal and local governments and non-profit groups, the White House said.

The quake was the strongest to hit the San Francisco Bay area since a magnitude-6.9 quake in 1989 and did broad damage to Napa County and neighboring Solano County.

It broke water mains and gas lines and sparked gas-fed fires that destroyed several mobile homes. The worst damage came near the epicenter in downtown Napa, where a post office, library and a 141-room hotel were among 150 homes and buildings deemed unsafe to occupy.

Napa County has estimated overall damage from the quake at more than $400 million, much of it to the area’s famed wineries.

The quake’s first death did not come until Wednesday, when a 65-year-old woman died from her head injuries more than two weeks later. Scores more were injured.