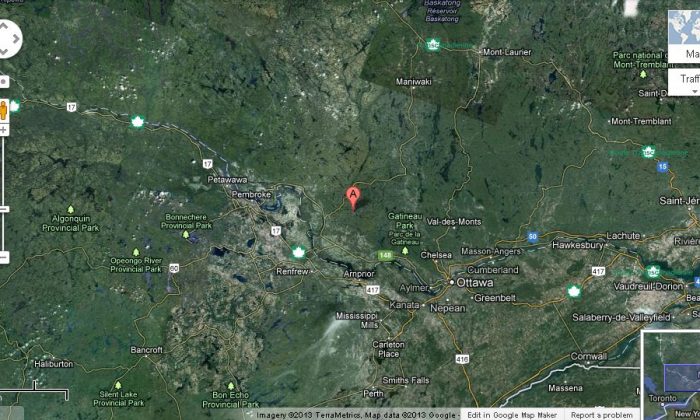 The estimated 5.2 earthquake in Shawville, Canada, which was felt in Ontario, Toronto, and multiple states in the United States. (Screenshot/Google Maps)
Canada

Earthquake in Canada, Around 5.2 Magnitude

A 5.2 earthquake struck in Shawville, Canada, outside of Ottawa, on May 16. The effects were felt as far away as Detroit, Michigan.

The earthquake started at a depth of 6.1 miles down and was felt widely in Ontario, and in the United States, including in New York and Vermont, according to the U.S. Geological Survey.

Don Duggan, who owns the Pontiac Home Bakery in Shawville, which is in Quebec, told CBC that he and his staff felt the quake around 9:45 a.m.

“It was like a massive explosion that went off it just started shaking and the walls of the bakery were moving,” said Duggan. “I thought it was my propane tanks exploding. We were evacuating employees out of the building. It lasted for about 25 seconds and it went on for about another minute.”

“The windowsill, the walls seemed to shift up and down,” Shawville Mayor Albert Armstrong told The Canadian Press. “My cabinet behind me was shaking and twisting.”

Canadians on Twitter from Toronto and Ontario said they felt the quake and the aftershock.

Brittany Houston, a graphic designer living in Uxbridge, a town in south-central Ontario, said that she was woken up by the it.

“Thought it was my dryer at first turns out it was just a #earthquake,” she tweeted.

Eric Daniels, a fantasy poker manager at Global Poker Index, said that he was at an airport in Toronto and the whole building shook.

In the United States, people in communities in northern New York reported feeling their homes shake. New York Governor Andrew Cuomo said in a statement that though the earthquake was felt throughout the state, there have been no reports of damage to any of the state’s critical infrastructure. The quake epicenter was 253 miles from Albany, New York; 192 miles from Syracuse, New York; and 240 miles from Buffale, New York.

Don Goralski, chief of staff at the University of Buffalo’s Multidisciplinary Center for Earthquake Engineering Research told WBFO 88.7 that it’s not unusual for earthquakes to be felt far and wide. Earthquakes in this part of the North American plate are often felt over great distances,” Goralski said.

Detroit residents told WWJ Newsradio 950 that they felt the earthquake.

Andrew Johnson, who works at Greenpath Debt Solutions in Detroit, said he and his co-workers “all of a sudden felt a real ebb and flow, a real back and forth motion.”