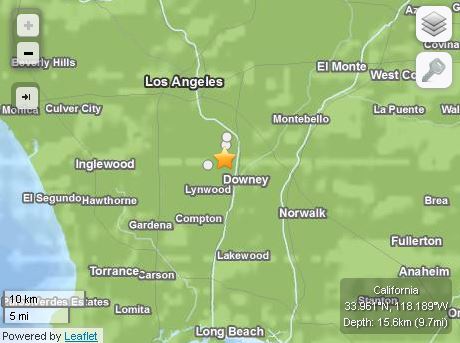 An earthquake that hit today in California was felt by residents in the nearby area.

The U.S. Geological Service said that the quake registered as 3.3 magnitude.

It hit directly under Cudahy and just one mile from Bell, South Gate, and Maywood; south of Los Angeles.

Residents in the area took to Twitter to say that they had felt the quake.

“Heard the rumble b4 the quick jolt in Downey,” said one.

“Very strong jolt that lasted about a second. Felt like a car had hit my house,” said another.

“Felt it in Long Beach. A small jolt up and side to side,” said yet another.

Celebrities also said that they felt it.

“I thought I was crazy until I checked twitter. So thanks for keepin me sane,” said Sarah Hyland.

“Felt like an elephant just kicked my house,” said Moby.

“At first I thought the earthquake was my wife starting some frisky business then I remembered she’s in #prison,” said Rob Delany.