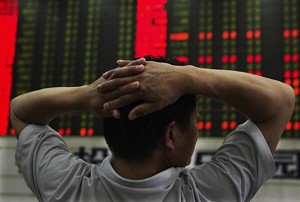 An investor views stock index at a securities company on June 13, 2008 in Wuhan of Hubei Province, China. Chinese stocks fell to a 15-month low as investors were still nervous about the inflationary pressure and tightening policy. (China Photos/Getty Images)
China

Earthquake on the Chinese Stock Market

SHANGHAI—Chinese stocks fell on Thursday to the lowest level in 14 months this week, resulting in angry investors holding a protest at the Shanghai Securities Exchange.

Public protests are very rare in Shanghai, where security control is usually tight and dissidents are always closely watched. The demonstrations are an indication that the stock market crash has triggered great anger and despair among millions of small investors in China.

A small number of investors who sat on the steps of the Shanghai Securities Exchange said their hard-earned money was gone in an instant. One protester fainted and was taken to hospital.

Police kept a close eye on the protesters. A stock exchange security guard stopped the NTDTV photographer from filming the protest.

A text message venting investors' anger has been widely circulated through mobile phone networks and Internet chat rooms. It reads: “More than 100 million shareholders are being buried in the ruins of China's capital market's earthquake.”

Impacted by tightened monetary policies and the slow growth of business profits, the Shanghai composite index fell 2.21 per cent on Thursday, reaching a 14-month low.

Over the past few days, the Shanghai index is down 11 per cent. Compared to its highest point last October, it has dropped 52 per cent. In Shanghai and Shenzhen alone, the capital losses are about 190 billion Chinese Yuan since October 2007.

Many investors are hoping the Chinese regime will intervene to stop the stock market from plunging even further. But that would mean loosening its tight monetary policies, which would raise China's inflation rate which is already at an 11-year high.

Analysts believe the discontent among investors will continue to grow.