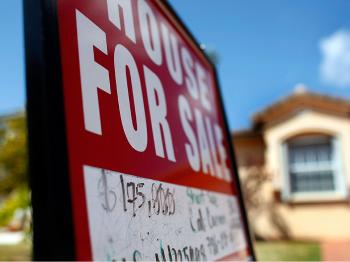 The National Association of Realtors announced that sales of existing homes grew 5.1 percent to an annual rate of 4.72 million last month, from 4.49 million units in January. (Joe Raedle/Getty Images)
US

By Ram Srinivasan
Print
Orders for durable goods manufactured in the United States as well as sales of new homes showed unexpected increases in the month of February, sparking some optimism about a recovering economy.

Both numbers come after six straight months of falling orders.

The reports from the U.S. Census Bureau showed that orders for durable goods increased by around 3.4 percent from the previous month.

Durable goods refer to manufactured goods such as cars and electrical appliances, goods which enable businesses and individuals to be more productive. The 3.4 percent increase represents a $5.5 billion increase in purchases, pushing the total orders to $165.6 billion.

A report published by the Commerce Department showed that sales of new homes across the country increased by around five per cent. The increase in sales resulted in a seasonally adjusted rate of around 337,00 units sold in February, up from January's revised estimate of 322,000.

The numbers come in the wake of a report on Monday by the National Realtors, which showed a 5.1 per cent increase in sales of existing homes.

Sales of computers were up 10 per cent, while defense purchases of military aircraft and parts were also up.

The figures represent a positive change in the rate of spending on two crucial indicators of economic strength. Since the worldwide credit crisis began, the United States and other governments have been injecting trillions of dollars into national economies to keep credit flowing and economies in robust shape.