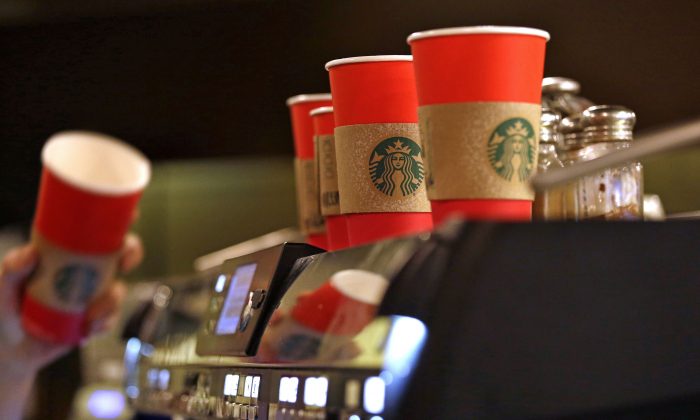 A barista reaches for a red paper cup as more, with cardboard liners already attached, line the top of an espresso machine at a Starbucks coffee shop in the Pike Place Market, Tuesday, Nov. 10, 2015, in Seattle. It's as red as Santa's suit, a poinsettia blossom or a loud Christmas sweater. Yet Starbucks' minimalist new holiday coffee cup has set off complaints that the chain is making war on Christmas. (AP Photo/Elaine Thompson)
Business & Markets

Dunkin’ Donuts entered the seasonal cup design “war” with Starbucks, posting its own design on Nov. 11.

A number of people, many of which Christians, have complained about Starbucks’ plain red holiday cups, saying it goes against the tradition of Christmas. They pointed to the chain’s old coffee cups, which included festive decorations. However, a number of people thought the whole debate is a waste of time.

“Starbucks REMOVED CHRISTMAS from their cups because they hate Jesus,” said Joshua Feuerstein in a viral Facebook post. He also called on people to give their name at Starbucks as “Merry Christmas” while in an attempt “trick” Starbucks baristas into saying the greeting.

Dunkin’ Donuts unveiled its seasonal holiday cups, and it features wreaths and “Joy” this year.

Republican presidential hopeful Donald Trump chimed in on the debate.

“I have one of the most successful Starbucks in Trump Tower,” Trump said at a recent campaign rally. “Maybe we should boycott Starbucks? I don’t know. Seriously, I don’t care. By the way, that’s the end of that lease but who cares.”

But he added, “If I become president, we’re all going to be saying ‘Merry Christmas’ again,” referring to some businesses refraining from using the term and replacing it with “happy holidays.”

Jeffrey Fields, the vice president of design for Starbucks, said in a release that the new cups are meant to embrace the “simplicity and quietness” of the holiday season. “We have anchored the design with the classic Starbucks holiday red that is bright and exciting,” he added. “The ombré creates a distinctive dimension, fluidity and weightedness.”

“In the past, we have told stories with our holiday cups designs,” said Fields. “This year we wanted to usher in the holidays with a purity of design that welcomes all of our stories.”