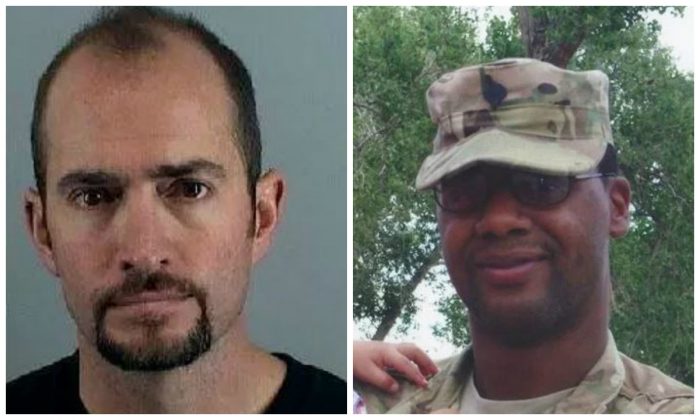 A driver charged with killing an Afghanistan veteran in 2012 while driving under the influence received his sentence this week.

Daniel Barrett Swecker, 47, was driving 80 miles per hour on I-25 in Colorado when he slammed into 24-year-old Nelson Marvin Canada, an Army vet who had served in Afghanistan. This was Swecker’s third DUI.

Canada, who had gotten out of an SUV he was riding in to take the wheel because the driver was drunk, was thrown 124 feet, according to the Denver Post.

Swecker was originally sentenced to six years in jail for the DUI and murder conviction, but he appealed his sentence multiple times, reported 9News.

A jury found Swecker guilty in 2014, but a judge granted him bond while he appealed.

Swecker’s appeals were eventually denied, but on Jan. 18 of this year, a new judge granted a motion to reconsider his sentence.

Whitaker said that Swecker had taken advantage of the time from his original sentence and stayed sober and worked to better himself and the community.

“We’re happy with the consideration the judge gave to the unique circumstances of this case to the realities of what a great man, veteran, husband, father Mr. Swecker is, what he’s given back to the community,” said Sarah Schielke, Swecker’s attorney. “I think in a really tragic case for everybody, there was justice served.”

“No person on their third #DUI who runs over and kills a person and flees the scene should ever avoid prison. Colorado’s laws on vehicular homicide are weak, and this is proof of it.” Fix the law. #PublicSafety #coleg #copolitics https://t.co/1BLEFFrQJD

“That person can flee the scene, picking themselves over the carnage that they left behind, go to trial because they refuse to take responsibility for their conduct, be convicted by a jury of their peers and yet walk out of this courthouse,” he said, reported KKTV.

“Our laws need to change to reflect the reality that drunk drivers that kill people must go to prison.”

Swecker walked away from the scene without calling 911 and walked more than a mile to a gas station where his wife picked him up, reported The Denver Post. His blood alcohol level was .118 nearly two hours after the crash. In Colorado, .08 is considered the legal level of intoxication.

“Every step of the way, the defendant avoided taking any responsibility for his conduct. He blamed the victims and the way the road was built and the lab that tested his blood, but a jury of Douglas County citizens didn’t buy it,” added Senior Deputy District Attorney Chris Wilcox, who prosecuted the case. “Their verdict still speaks loud and clear: He drove drunk and killed a father and husband in our community.”

Canada is survived by his wife and daughter.