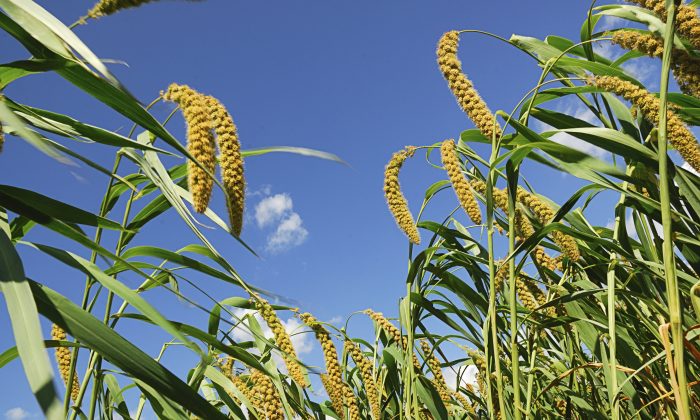 Most people in the United States put millet in the birdfeeder, but Amrita Hazra said we ought to eat it ourselves.

Hazra, a postdoctoral researcher at the University of California–Berkeley, plant and microbial biology department, and her colleagues on the Millet Project are cultivating millets, testing millet recipes, and offering samples of millet-based products at local food events and exhibits.

University writer Gretchen Kell spoke with Hazra about the intersection between science and food, what’s so special about millet, and why California is the perfect place to grow it.

What Is Millet, or Is It Millets? And Isn’t It Just for the Birds?

Millet is the name of a type of grain crop that’s been a staple food for humans in many parts of the world. You say millets when referring to the different types of millet species. And yes, in the United States, indeed, millets are primarily used in grain mixes for various kinds of birds, and they’re also forage crops for cattle and poultry. Today, despite being lesser known in Western society, millets are widely cultivated and consumed in many countries in Africa (Ethiopia, Tanzania, Nigeria) and Asia (India, China).

Millets are among the oldest of cultivated grain crops and yet many people haven’t heard about them. Before the popularity of rice, corn, and wheat, millet was a staple food, especially in the semi-arid regions of South and East Asia, Africa, and parts of Europe. In China, records of domestication of foxtail millet and proso millet date back to approximately 10,000 years ago.

The five millet species commonly grown as commercial crops are proso, foxtail, pearl, Japanese barnyard, and browntop—although there are many other types. Proso millet was introduced into the United States from Europe during the 18th century. Today, Colorado is the major U.S. producer, followed by the Dakotas and Nebraska.

What’s So Great About Millet?

The drought in California is in its fourth year and has brought growers, consumers, policymakers, and food activists together. The importance of diversity in agriculture and in the food we consume is becoming apparent—we shouldn’t be only growing water-intensive monocultures. Millets are robust dryland crops—many millet varieties are inherently drought-tolerant.

Millets can be grown from seed quite easily at higher temperatures, can grow in skeletal soils and seldom require synthetic fertilizers. They have a short growing period of 100 to 110 days from seed to grain, and as a result are commonly used as rotation crops between the growth of the other crops. Most millet grains are not easily affected by storage pests. And I could go on!

Where Does Your Interest in Millet Come From?

I grew up in Pune, India, where my brother and I were raised with science as a lifestyle rather than a subject of study. My father is an organic chemist, and my mother is a plant biologist and biochemist. Our dinner table conversations often evolved informally into extended discussions about the connections between chemistry, plants, biology, and food policy.

My mother is also a keen kitchen scientist and always inquires about the whats and whys of the science of the food while she cooks. For example, what factors contribute to the uniform puffing of a roti, an Indian wheat flatbread similar to a tortilla when half cooked on a pan and then finished by putting over an open fire? Is it the proportion of ingredients and process of kneading the dough, the way the flatbread is rolled or the heat retention capacity of the pan’s material? It is yet unknown.

My father’s family members were farmers, and our annual visits to his village in rural West Bengal sparked my curiosity about farming and where our food comes from. My interest in millets was triggered by the availability of various types of grains and lentils in my hometown of Pune. Even when I was growing up, rice and wheat were staples in India, but occasional trips to the many farmers’ markets in the city opened my eyes and mind to the true grass-root level meaning of food diversity.

Why Is California a Perfect Place to Grow Millets?

California is in a drought. And given that a large percentage of the state’s water goes toward agriculture, growing drought-tolerant crops such as millets is a natural first step to diversify agriculture. Growing up in India, I remember eating a type of meal called a “thali.” A thali typically contains between 8 and 12 different small portions of vegetable-, lentil-, cereal-, and meat-based foods.

The idea is to have small portions of a variety of foods to keep a sustained intake of nutrients and micronutrients. But in the United States, growers are mainly cultivating monocultures of a few types of crops, and this is reflected on supermarket shelves and on our plates—big portions of a very small variety of food crops.

Introducing diversity in agriculture in California will be a big step and a model for changing the mindsets of growers and consumers in other parts of the country. The movement has begun—the United Nations recently noted that 2016 will be the “International Year of the Pulses” (beans, peas, lentils, and chickpeas), the U.N.’s Food and Agriculture Organization declared quinoa as the grain of the year in 2013, and the Whole Grains Council has celebrated millet and teff (a cereal grain native to northeastern Africa, also a minor millet) as a grain of the month.

What Kinds of Food and Drink Can Be Made With Millet?

Millet is a staple in many cultures, and there is a rich pool of traditional recipes available from Africa, Asia, and Europe. Teff is used for making injera bread in Ethiopia, pearl millet is used in India for bhakri bread, and proso millet is used in regional cuisine in Europe, to make sausages in Austria, and in a breakfast porridge called kasha in Russia, and uji in Kenya.

However, we had to do homework to see how to incorporate millet into our modern diets. We’ve learned that one can substitute millet for ingredients like rice, oats, quinoa, and couscous in recipes for risotto, porridge, tabouleh, salads, and pilaf. You can see some of the recipes we have catalogued on our Millet Project website.

Also, millets are already in some gluten-free products at the market such as bread and pancake mixes, tortilla chips, and beer. If anyone tries using millet in a recipe and likes it, email us, and we’ll put the recipe on our website!

The Millet Project team’s goal is to diversify agriculture and our diets by cultivating and consuming these lesser-known grains called millets. Corn, wheat, and rice comprise at least 80 percent of worldwide cereal production, in spite of the large variety of cereals traditionally available in different parts of the world. This has caused losses in the variety of food and, consequently, the nutrients in our diet, which together have adverse environmental and nutritional impacts.

We have millets currently being farmed in six locations in Northern California. The six of us [in the Millet Project] are the interface between the farmers and consumers; we’re trying to learn from and with these farmers about the different geographical, ecological, and soil-related factors that influence millet farming in California.

We also have our own little plot at the Gill Tract Farm where we are doing some preliminary research on how to grow millets under different conditions. We’re growing four different types—foxtail, pearl, proso, and Japanese barnyard. So far, proso is the only millet currently available for sale for human consumption in the United States, and we want to expand that.