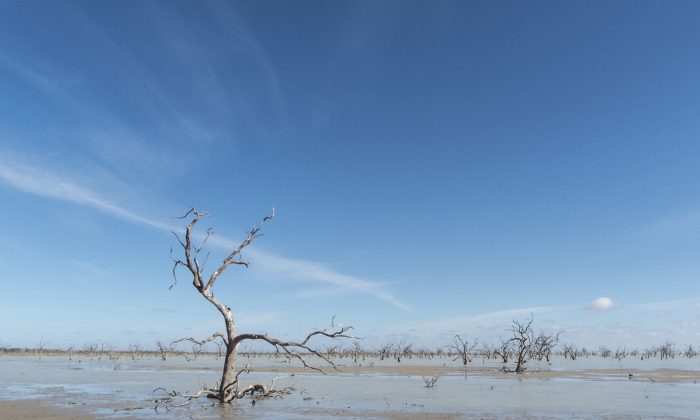 "Foresters and ecologists have long gauged the severity of drought from tree mortality that happens the same year," says James S. Clark. "But the damage suffered during drought sets in motion a decline that can kill trees years later." (Klaus Hollitzer/iStock)
Environment

The fact that drought kills trees is well known. But a new study of nearly 29,000 trees at two research forests in North Carolina shows the effects can be far more long-lasting than experts once thought.

“This is the first research to show that declines in tree growth during a drought can significantly reduce long-term tree survival in Southeastern forests for up to a decade after the drought ends,” says Aaron Berdanier, a PhD student in forest ecology at Duke University’s Nicholas School of the Environment.

Of the trees that were affected by drought and failed to recover, 72 percent were dead within the decade.

By identifying the species at highest risk and the environmental factors that shape the odds of survival, the findings may give managers better ways to recognize and reverse drought-induced declines in the region’s forests before it’s too late, says James S. Clark, professor of environmental science.

“Foresters and ecologists have long gauged the severity of drought from tree mortality that happens the same year. But the damage suffered during drought sets in motion a decline that can kill trees years later. This study identifies the symptoms that can mark an individual for later death,” Clark says.

“As our future climate warms and droughts in the Southeast become more frequent and severe, this is going to be a major region-wide concern.”

As tree growth slows during a drought, it decreases a tree’s ability to take in enough carbon to stay alive, Berdanier says. If the tree can’t reverse this trend, it health progressively declines and over time it slowly dies.

These declines are more gradual and less explicit than the catastrophic die-offs that have become increasingly common after major droughts in the West and other regions, but the long-term impacts can be severe.

Of the trees that were affected by drought and failed to recover, 72 percent were dead within the decade.

To conduct the study, that is published online in the journal Ecological Applications, researchers analyzed data dating back to 1993 on the annual growth rates of 28,879 individual trees from 35 species growing at the Duke University Forest in North Carolina’s Piedmont and at the Coweeta Long Term Ecological Research site in the state’s western mountains.

Both sites are forested primarily with mature stands of mixed conifers and hardwoods—typical of forests found across much of the Southeast—and both sites experienced major droughts in 2000-02, 2007, and 2010. Growth rates were determined by measuring year-to-year changes in tree trunk diameters.

“Averaged across species, we found that a tree’s long-term mortality risk increases when its cumulative diameter growth falls below 54 percent of the growth of nearby trees of the same species,” Clark says. “This gives scientists and forest managers a useful measure to monitor for.”

Trees growing on normally wetter sites and those from drought-tolerant species-including the wood and furniture industry staples, loblolly pine, and white oak—are better able to recover their pre-drought growth rates after a drought ends.

Thinning out competing trees from around an injured tree can reduce its risk of death.
“After a drought occurs, managers may have a couple of years to do something to prevent declines from causing a tree’s death,” Berdanier says. “Knowing what to do and what to look for can make a big difference.”