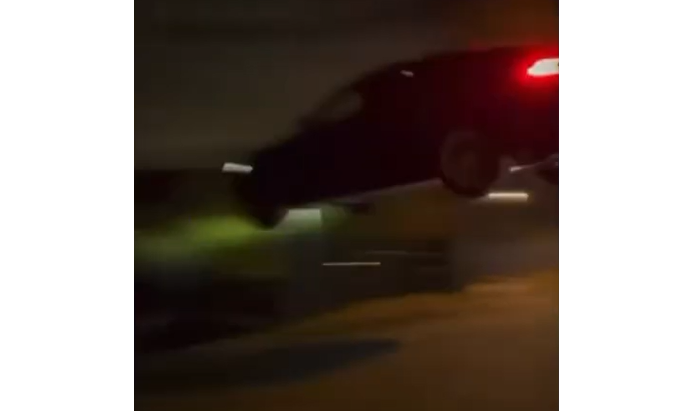 Footage of a Tesla spending about two seconds in the air before crash landing in Los Angeles’s Echo Park neighborhood has been going viral on social media.

A group of onlookers can be seen waiting with anticipation when a black Model S comes roaring towards them and launches over a steep intersection, crashing nose down on the next block. Metal scraping against concrete can be heard as the $150,000 vehicle runs into several trash cans and two parked cars before coming to a stop.

“Everybody came outside to see guys piling out of the totaled Tesla, getting into other Teslas that had come down the hill and were now waiting,” said Jordan Hook, a resident in the neighborhood, whose parked Subaru was a victim of the jumping vehicle.

Hook told NTD Television that some of his neighbors saw that the driver had a cat with him.

The high-speed stunt gone wrong happened just after midnight on the morning of March 20. The driver fled the scene and abandoned the vehicle, which was a rental, according to the Los Angeles Police Department.

The LAPD is offering up to a $1,000 reward for tips on the misdemeanor hit-and-run. The driver is still unidentified and detectives will be following up with the rental company, according to police.

Hook said it looks like his own car is totaled.

“I just put like $4,500 into getting a new motor in it last month, because I’m a musician and I travel a lot and I tour a lot, and this has been a great car,” said Hook.

Hook said his neighbors helped him start a GoFundMe page open to people who want to help him replace his totaled car so he can get back on the road as a touring musician.

The intersection where the stunt happened looks like the same one in a video posted in 2020 of a Tesla Model X jumping during the day at a lower speed.