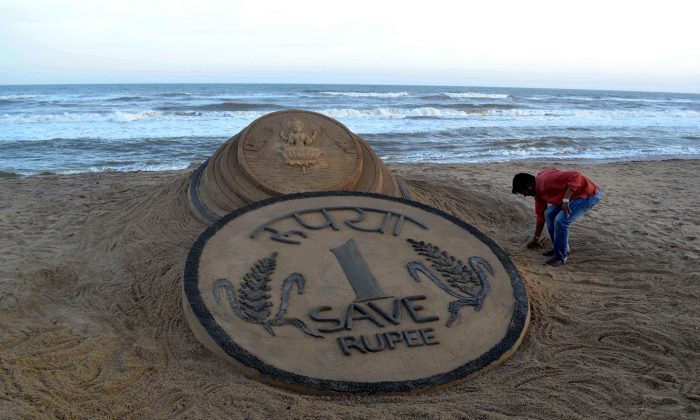 Indian sand artist Sudarsan Pattnaik puts the finishing touches to his sand sculpture of a rupee coin in front of a Hindu Goddess on the beach at Puri, some 65km from Bhubaneswar on August 22, 2013. The rupee, which has hit record low against the U.S. dollar has not deterred those with dreams to go abroad as the returns on investment have also increased manifold times. (Strdel/AFP/Getty Images)
India

Indians’ dream of migrating to overseas destination continues to go strong in spite of the declining rupee, which fell to a record low against the U.S. currency this year.

Several promising advantages in the current scenario are still encouraging the Indian to migrate to other developed countries on study or work visas.

“Studying abroad is an investment for your career. The recent economic changes have not affected students’ plan to study abroad,” said Vishal Goswamy, the marketing head at Manya Abroad-Princeton Review, a company that delivers foreign education to Indian students.

“A stronger dollar has resulted in economic recovery of the U.S. In 2013, 1.44 million jobs have been created in the U.S. private sector,” he said.

According to Kiplanger’s October 2013 Economic Outlooks, in spite of the recent standoff between the U.S. government and U.S. congress, economy would post a GDP of 2 percent in 2013 and improving further in 2014. Goswamy said this trend implies more “jobs, better paying jobs, more work visas for Indian students, and better than before ROI (return on investment).”

The same trend is also observed in rural India which supplies a lot of labor to the hospitality industry abroad, particularly to countries in South-East Asia and Central Asia.

Shantanu Newse, a young entrepreneur and CEO of Balaji HRM and Talent Acquisition company that provides management trainees and service staff to hospitality industry abroad said: “We got many candidates who are earning meager salaries in India. They want to grow in life, and as you see, with the rising prices of daily commodities, it has become a serious issue. How are they going to manage their living?”

“We are providing them a very good option to work abroad and earn bit more that helps them to grow,” he said. The company has placed 10 aspiring young Indian, in the group of 20–25 years, to Singapore, United Arab Emirates, and Bahrain in the last two months and is ready to place another 5 abroad this month from around India.

However, the young CEO mentions that in rural India most of the aspirants are not aware that the rupee is performing bad, and therefore, people from rural background work out odd ways to arrange funds like by selling their land or mortgaging it. Goswamy on the other hand points out a different scenario with the urban students, mentioning that these students are aware of the declining rupee, but are still least demotivated by it.

“They are more interested in their career prospects and most of their questions revolve around finding the right universities for them, ones which will do justice to their career. We have not seen a dip in the number of students who are applying with us, in fact, we are seeing a robust increase,” Goswamy said.