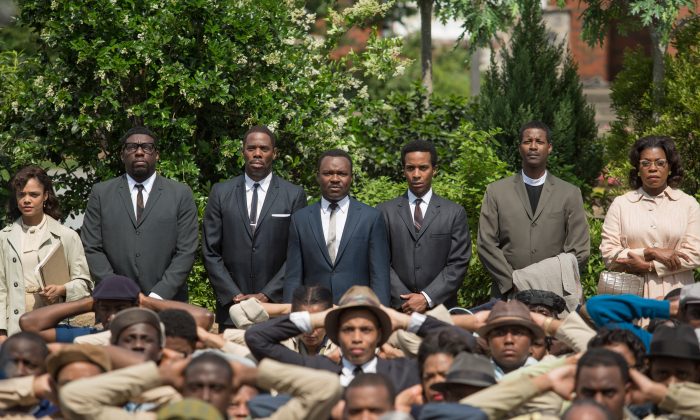 At the end of the third March from Selma, Ala., to Montgomery, Ala., in 1965, Martin Luther King gave a speech that director Ava Duvernay could not use in her movie about him, Selma.  He spoke about artificially low wages, not just abstract ideas of brotherhood.

He said that Southern oligarchs created Jim Crow in order to crush the Populist movement of the 19th century. He said it was intended to trick poor white people so that they could not see they had common interests with poor black people. He said the illusion of white supremacy succeeded in keeping black and white people apart.

“Why, if the poor white plantation or mill worker became dissatisfied with his low wages, the plantation or mill owner would merely threaten to fire him and hire former Negro slaves and pay him even less. Thus, the southern wage level was kept almost unbearably low,” said King. He said that the white aristocracy feared that the two impoverished groups would work together and vote to change their society. “Thus, the threat of the free exercise of the ballot by the Negro and the white masses alike resulted in the establishment of a segregated society.”

“I want you to follow me through here because this is very important to see the roots of racism and the denial of the right to vote,” said King.

In a long speech, he analyzed what he saw as a conspiracy by business interests to not pay living wages. That side of King gets lost in the sound bites that have come to represent him.

He praised President Lyndon Johnson: “A president born in the South had the sensitivity to feel the will of the country, and in an address that will live in history as one of the most passionate pleas for human rights ever made by a president of our nation, he pledged the might of the federal government to cast off the centuries-old blight.”

The entire Montgomery speech is available in the archives of Stanford University.