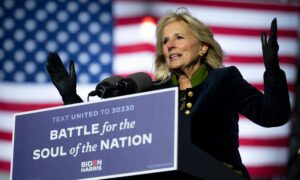 Dr. Biden and the Value of a College Degree

By now you’ve probably heard about the controversial article in the Wall Street Journal about Jill Biden by Joseph Epstein who says her use of the title doctor “sounds and feels fraudulent, not to say a touch comic.” The article was snarky and disrespectful but nonetheless leads to some interesting issues that need to be discussed.

First, let’s look at Dr. Biden’s doctoral thesis at the University of Delaware. There are obvious problems and contradictions, such as, “[In t]he community college classroom … [d]iversity, rather than homogeneity, is the norm” and “Although there is strength in diversity as a classroom component, the lack of homogeneity in academic ability makes it difficult to teach to a single standard” and “As a result, due to the diversity of the student population, student retention is a major problem faced by the community college.” These statements are followed a bit later by, “Many students do not feel comfortable at their community colleges because of the lack of diversity …”

Other writers have pointed out additional mistakes, typos, and the shallowness of her work.

Joseph Epstein, or should I say Dr. Joseph Epstein (he holds an honorary doctorate), is now being cancelled by the woke cancel culture because of his criticism. Ok, his article was pretty demeaning, but I’d like to point out that Secretary of State Condoleeza Rice was rarely called Dr. Rice, and sometimes called simply “Condy” by the mainstream media despite having a Ph.D. in political science. Presidential candidate and Secretary of Housing and Urban Development Ben Carson was rarely called Dr. Carson by the mainstream media despite having a medical degree and being a pioneer in the field of brain surgery. But as one colleague told me, “The left is always trying to outdo the right. While we have a standard, they have a double standard!”

Do You Need a Degree?

I’m a third generation American. My grandparents struggled to get to America to escape persecution in Europe. They worked hard to support their families, opening small businesses and working around the clock, without any formal education. Their children also started businesses but dreamed that their kids would go to college. My father never taught me to fix a car, build a go kart, operate a lathe, or run wires in the house because he wanted me to work with my head not my hands. So college was a given; I never saw any other path for myself.

If you watch movies from the 1930s through the 1960s, the college students were respectable and bright. Maybe awkward. They had their heads buried in their books, so they didn’t understand how the world really worked, but they understood math and science and economics and maybe even philosophy and ancient history. They were smart. Maybe that was an exaggerated view from Hollywood, but it’s certainly not the case these days.

Go to a college campus and a few students will stand out, but most don’t seem to care much about their studies. I’ve lectured at colleges. Some students are diligent and thoughtful. Most don’t seem that way. According to the Gates Foundation, over 50 percent of students attending two-year institutions and 33 percent of students attending four-year colleges must take developmental or remedial courses when they arrive.

As a Ph.D. student at Stanford, I was often impressed but sometimes disappointed in the work of the students and the professors. I joined a team in the Materials Science Department to examine the light absorption properties of semiconductor materials imbued with metallic contamination. On my first day, the student theoretician in the group showed a graph that looked something like this.

After a discussion about the results, I timidly asked a question: what were the three lines on the graph? The other student explained that the green line in the middle represented our theoretical model while the orange line at the top was Harvard’s theoretical model. What about the purple line at the bottom? That, he explained, was the experimental result. After I stared at him blankly for a moment, he explained further. Once we start getting the same results as Harvard, then we can join forces and work toward the experimental result. In other words, getting the same incorrect results as Harvard was more important than getting correct results. That was pretty much the moment I decided to drop out of the Ph.D. program at Stanford.

I decided to take a short break from school, for the first time in my life, so that I could earn some money and think about my future. That short break has lasted 38 years and counting.

Since that time, I’ve had to hire engineers for my various companies and found that even many from prestigious schools such as Stanford, Berkeley, and MIT were not very impressive. Don’t get me wrong, I’ve met impressive graduates of these schools. But it’s not uniform.

I once complained to a mentor of mine at Stanford that I couldn’t find anyone studying Computer Science at Stanford or Berkeley who could actually write computer code. They knew the theory and the statistics and the algorithms but not how to write code. Or they all wanted to start their own company, not actually work for one. I know, he told me, you need to recruit at Cal Poly down the coast, because that less prestigious school actually taught usable skills.

In fact, another professor friend at Stanford invited me to sit in on a student’s Ph.D. dissertation for the Computer Science Department. Another representative from industry was there, too. Afterwards, I thanked the professor for inviting me and walked out with the other businessperson who turned to me and said, “That’s what they give out a Ph.D. for these days?” I let out a breath. “I know,” I said. “That’s a project I’d give to one of my employees and expect a written report within a month.”

I once hired an autistic young man who had come to me for a job. He had been pursuing a college degree in computer science for seven years at three different colleges but was unsuccessful in completing his degree. I was wary but started questioning him about computer programming and he turned out to be very impressive. I hired him for a summer internship. He would arrive each day, silently enter his cubicle, and type away for hours. He’d come out once or twice a day, randomly enter someone else’s cubicle and start talking. If that person said he or she was busy, the young man might enter another cubicle. He liked to talk about current events or science or random topics for a little bit before returning to his cubicle to write more code. And he tackled increasingly difficult problems by writing exceedingly good code in a surprisingly fast time.

After his summer internship, his well-educated parents called me and told me that their son had decided to take a job with a Silicon Valley startup rather than continue with college. They hoped I would talk to him. I said I would, but they should hear what I wanted to say because they might change their minds. I said that their son was one of the best programmers I’d ever met, that he had a highly valuable skill, and that he could do very well in the business world without a college degree. They actually felt relieved. They just needed to hear that their brilliant but eccentric son was going to be alright.

It’s important not to confuse a college degree with an education. Maybe they used to be more highly correlated, but I’m not so sure anymore. Many successful people don’t have college degrees, and many college graduates have spent four or more years just avoiding responsibility. While many college graduates have done great things, we shouldn’t assume that conferring a degree on someone makes them smart—that’s the Scarecrow Effect that I’ve written about.

Which brings me back around to Jill Biden, her unimpressive doctoral dissertation, and her pet program to forgive student debt.

We must do everything possible to press Congress to vote against any program to forgive student debt. There are many reasons to push back against this horrible idea. Most importantly, it will give incentive to yet another generation of young adults to waste their time in college pursuing degrees in subjects that hold no benefit for themselves or for society. It will be a giant drain on already bloated government budgets. And it will reward those who made foolish decisions rather than those who made smart, productive decisions and already paid off their student loans.

If you really want to research and write about Gender Studies or Queer Musicology or Golf Management or Entrepreneurship (if you go to school to study entrepreneurship then you don’t have what it takes to be an entrepreneur), you can do that on your own while you’re working at a real job. If you are truly passionate about it, you’ll find a way to get it done.