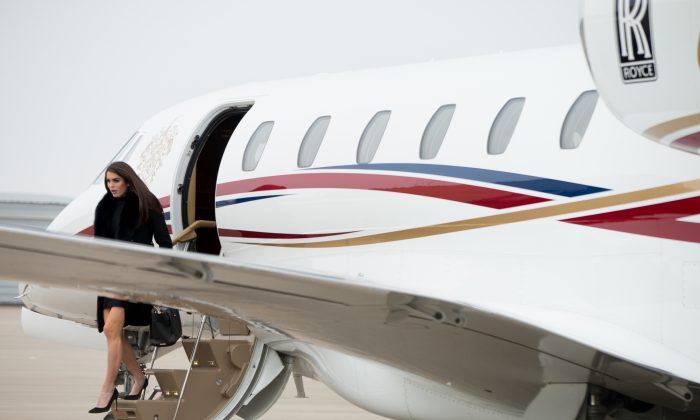 Donald Trump’s Cessna jet has been grounded due to it’s not being registered with the Federal Aviation Agency, according to the New York Times.

The 1997 Cessna 750 Citation X has been been flying on an expired registration since Feb. 1. On April 20, an F.A.A. official informed the plane’s pilot that the cannot fly until its registration has been renewed.

Trump Has Been Flying in an Unregistered Plane

“FAA inspectors have contacted the chief pilot of N725DT about the aircraft’s expired registration,” spokeswoman for the F.A.A. Laura J. Brown said in a statement. N725DT is the plane’s tail number.

Flying with no registration could result in a penalty of up to $27,500 or a criminal fine of up to $250,000 and imprisonment for up to three years.

Brown did not comment whether or not the F.A.A. would take action, although it’s unlikely that the agency would seek the maximum penalty.

The FAA warned Trump in December that the registration for his plane was coming to an end.

“On Dec. 1, DJT Operations CX L.L.C., the limited liability company owned by Mr. Trump that operates the Cessna, received a “final notice” from the F.A.A.,” according to records reviewed by The Times.

It takes $5 to register a plane, and the registration is good for three years.

“The aircraft owner is currently working with the F.A.A.’s Aircraft Registry and will reregister the aircraft before further flight,” added Brown.

Donald Trump Is Against Restricting Bathroom Rights for Transgender People

Trump owns another airplane, a Boeing 757, which has “Trump” in big letters on the outside and gold-plated fixtures inside. However, the Boeing airplane weighs over 100,000 pounds, which limits it from landing at smaller airports.

When asked about the plane’s registration, spokesperson for the Trump campaign, Hope Hicks has repeatedly said “The standard renewal process is just about complete.”

Trump is the leading Republican presidential nominee and has been using the smaller Cessna jet to get to and from more locations in the country.

He’s on the campaign trail looking toward primaries in the Northeast on April 26 in Connecticut, Pennsylvania, Rhode Island, Maryland, and Delaware. He’s also been campaigning in the state of Indiana, who’s primary will be on on May 3.

Currently he has 845 delegates and looks to pick up enough delegates to make it over the 1,237 majority in order to secure the nomination.