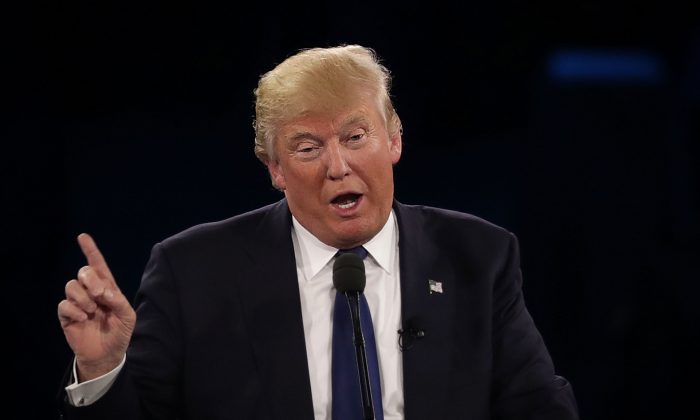 Donald Trump: US Needs to Be ‘Unpredictable,’ Obama ‘Talks Too Much’

Donald Trump says the United States is “totally predictable” and said his administration would switch things up.

Trump later noted that he doesn’t like to explain a lot of his views in great detail because it’s not favorable to America’s strategy to have them down for enemies to read about.

I guess they thought that was good politically, to say we’re sending fifty troops? I don’t think it was good.
— Donald Trump

“I’ll give you an example. President Obama, when he left Iraq, gave a specific date – we’re going to be out. I thought that was a terrible thing to do. And the enemy pulled back, because they don’t want die. Despite what you read, you know, they don’t want to die — and they just pulled back, and after we left, all hell broke out, right?” he said.

“And I’ll give you another example that I think was terrible: when they sent, a few months ago, they sent fifty troops in. You know, fifty elite troops. Now, why do we have to have a news conference to announce that we’re sending fifty troops? So those troops now have targets on their back. And…you shouldn’t do it. We’re so predictable: ‘Ladies and gentlemen, we’re sending fifty troops into Iraq or Syria. And these are our elite troops. And they’re going to do this and that and that and this.’ And those troops now are being hunted.”