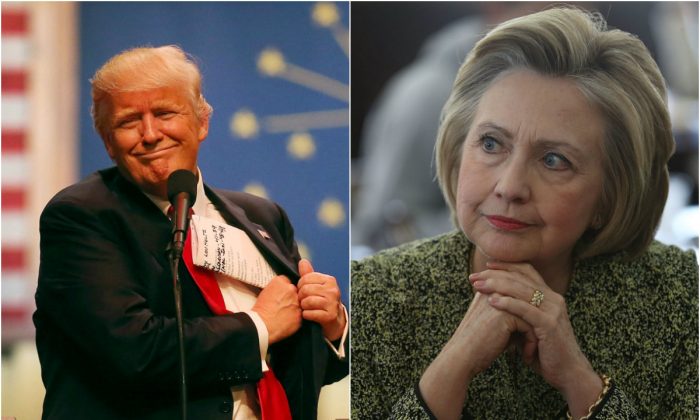 On the day he is solidifying his candidacy as the presumptive Republican nominee, Donald Trump is trailing Hillary Clinton by double-digits in a new CNN/ORC poll.

The poll shows Clinton with 54 percent to Trump’s 41 percent—a 13 percent margin—the largest lead for Clinton over Trump since last July.

Trump’s unfavorability is lower than in previous polls—most of which have the Republican frontrunner with more than 60 percent—and in a RealClearPolitics average, Trump has a 65 percent average unfavorability rating.

The latest poll surveyed 1,001 Americans and was conducted April 28 through May 1 via landlines and cellphones.

Trump scored higher on fixing the economy—beating Clinton 50 percent to 45 percent. According to the poll, the economy is the number one issue facing America, with 46 percent of those surveyed saying it’s “extremely important” and 42 percent saying it’s “very important.”

One question asked whether voters are supporting their candidate on the merits of the candidate or to avoid the alternative.

Voters’ reasons for backing Clinton are largely split, with 48 percent of her supporters saying they would vote for her because they support her, while 51 percent said their vote is an expression of their opposition to Trump.

Of Trump’s supporters, 57 percent are backing him because they oppose having another Clinton in the White House, while 43 percent actually support his campaign.

Both Clinton and Trump are the frontrunners of the Democratic and Republican parties, respectively, with Clinton sitting on 1,682 pledged delegates and 520 superdelegates for a combined 2,202 delegates. Clinton needs 2,382 delegates to win the Democratic nomination. Trump has 1,047 delegates of the 1,237 needed for nomination—although with Ted Cruz bowing out and John Kasich likely to do the same, he is the presumptive Republican nominee.

The poll was taken between April 28 and May 1—before Trump won the Indiana primary—and has a plus or minus 3 percentage points.