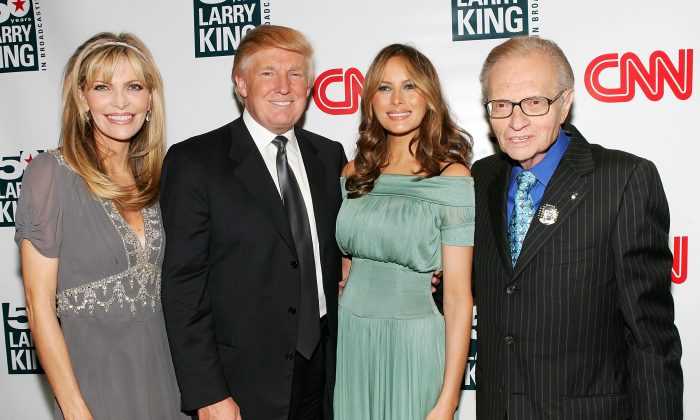 When asked about whether Moscow is trying to influence the presidential elections in the U.S., Trump said he believes it to be unlikely.

“I think it’s probably unlikely. Maybe the Democrats are putting that out—who knows,” Trump told King. “If they are doing something, I hope that somebody’s going to be able to find out so they can end it. Because that would not be appropriate at all.”

Trump was also asked in King’s interview whether he believed Russia was behind the hack of the DNC earlier this year.

“I don’t know who hacked [the DNC]. You tell me: Who hacked?” Trump said. “I have absolutely no opinion on that.”

The security firm hired by the DNC, CrowdStrike, had issued a report suggesting that two Russian hacking groups were responsible.

Trump spokesman Jason Miller told CNN that they were unaware King’s interview would be used as anything other than a podcast.

Trump’s interview aired on RT the day after the Republican candidate had defended comments he previously made about Russian President Vladamir Putin at the Commander-in-Chief forum hosted by NBC News on Sept. 7.

When asked by host Matt Lauer about a comment where he described Putin as “highly respected within his country and beyond,” Trump pointed to the Russian president’s 82 percent approval rating and compared him to President Obama.

Speaker of the House Paul Ryan (R-Wis.) said on Wednesday at a press conference that: “Vladimir Putin is an aggressor that does not share interests. Vladimir Putin is violating the sovereignty of neighboring countries. It certainly appears that he is conducting in state-sponsored cyberattacks on what appears to be our political system.”

“That is not acting in our interests, and that is an adversarial stance and he is acting like an adversary,” Ryan said.

“He is not praising him so much as saying we will work with people, anybody who wants to help—help stop the advantage of ISIS will be welcome in a Trump/Pence administration to do so,” Conway said on CBS This Morning.