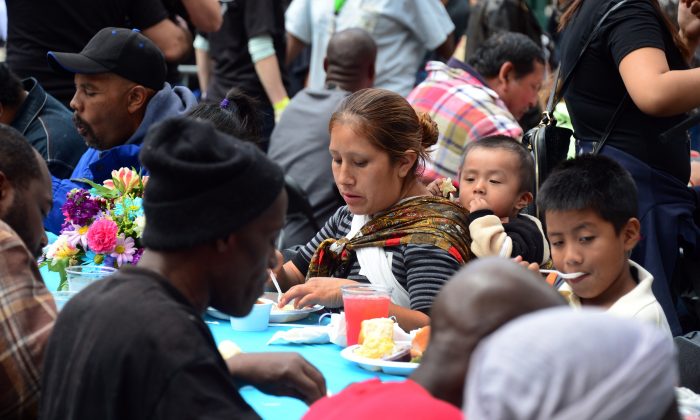 The homeless on Skid Row are seated for the annual Good Friday meal hosted by the LA Mission and served by volunteers and celebrities in Los Angeles on April 18, 2014. (Frederic J. Brown/AFP/Getty Images)
News

There is a direct correlation between the scourge of domestic violence and the growth of shelter and homeless populations.

This is a very real fear to many victims of domestic violence and can influence decisions that prevent abuse.

Recently, I assisted a woman whose husband was arrested for domestic violence. She frantically stated that she had no other family members to assist her. She said, “Where will I live?” and “How will I make ends meet?”

I introduced her to a domestic violence prevention organization that provided the guidance she needed to immediately leave her abusive husband.

Unfortunately, there are too many domestic violence victims who remain trapped in the cycle of violence. A lack of financial resources, shortage of affordable housing, and a fear of shelters and homelessness exacerbate America’s domestic violence crisis.

The U.S. Department of Justice states on its website, “We define domestic violence as a pattern of abusive behavior in any relationship that is used by one partner to gain or maintain power and control over another intimate partner. Domestic violence can be physical, sexual, emotional, economic, or psychological actions or threats of actions that influence another person. This includes any behaviors that intimidate, manipulate, humiliate, isolate, frighten, terrorize, coerce, threaten, blame, hurt, injure, or wound someone.”

According to the National Alliance to End Homelessness:

As it is in cities throughout America, domestic violence is a serious New York City problem.

The mayor has begun a rent subsidy program to move abuse victims out of shelters but domestic violence is a complicated issue. Factors include the following:

America’s schools and campuses must be an integral part of the solution. The youth of America often experience domestic violence within their families. We are fully committed to reawakening the nation when we safeguard all in society, including our youth, and empower them to identify and prevent domestic violence.