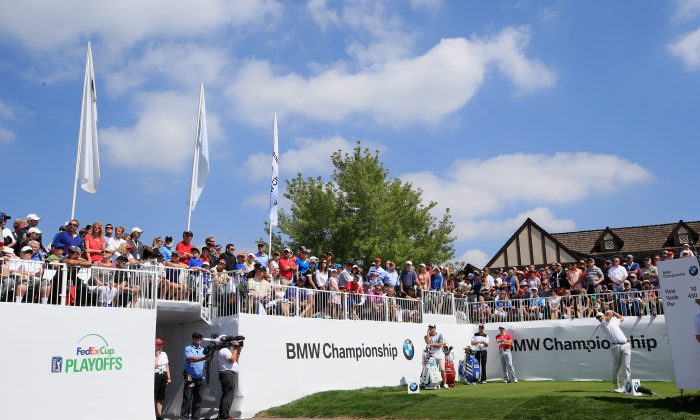 Ryan Palmer of the United States hits his tee shot on the tenth hole during the third round of the BMW Championship at the Cherry Hills Country Club on September 6, 2014 in Cherry Hills Village, Colorado. (Jamie Squire/Getty Images)
Golf

Doings in Denver: “Glad they’re back”

Englewood, CO—This week’s BMW Championship marks the first time the PGA Tour has returned to the immediate Denver area since 2006—when the final 21 years of staging The International came to a screeching halt.

The Mile High City area is showing how much it was missed with high gallery turnouts for this year’s event at Cherry Hills CC. The prevailing mood has been upbeat—akin to a major championship event.

“Glad they’re back,” was the comment from one fan near the practice area who had attended a number of International tour events. The International became a regular summer event feature held annually at the Castle Pines Golf Club at Castle Pine Village in Castle Rock, just south of Denver.

The end came for The International because of discontent from tournament founder Jack Vickers and the Castle Pine GC membership because a proposed switch in dates, from the previous August time-frame to July, would not ensure all of the top golfers would likely appear. Despite positive player feedback, and from the overall local market, The International failed to sway then world #1 Tiger Woods to add the event on his limited plate of appearances—although Woods had played in the event early on in his professional career.

The International also introduced the usage of a Modified Stableford scoring system, where players earn points for what they score on a given hole—a format completely different than the standard cumulative four-round totals played predominantly on the PGA Tour and elsewhere.

The parent organization for The BMW event is the Western Golf Association (WGA). Based in the Chicago area, the WGA has been a long time active participant in staging various major golf events. The former Western Open—now called The BMW Championship—was first staged in 1899 and was considered a major golf event until being supplanted by The Masters at Augusta National immediately after the end of World War II.

The WGA Open would become a staple on the PGA Tour schedule with the event rotated among several Chicago-based venues—most notably being played in successive years at Butler National GC in Oak Brook and Cog Hill in Lemont.

The creation of the Fed-Ex playoffs in 2007 provided a means for the PGA Tour to end its golf season with a series of key events leading up to the grand finale—The Tour Championship. The brain trust of the PGA Tour smartly staged a series of three events starting in late August, one in the greater New York metro area, called The Barclays originally the former Westchester Classic; followed by one in the greater Boston area, the Deutsche Bank, followed with the BMW. With the exception of the Boston event in, the other two areas rotate their host locations. The BMW is especially noteworthy because it has been played at locations beyond the greater Chicago area and has included visits to the St. Louis area as well as Indianapolis. The event will return to the Chicago area in 2015 when it goes back for a second time to Conway Farms in Lake Forest.

This year’s event at Cherry Hills has produced general fan euphoria since it comes on the heels of the opening of the National Football League season and the beloved home team Denver Broncos.

Even with the absence of Woods, who did not qualify for the FedEx Playoffs, the upbeat nature has shown the Denver marketplace with a thirst for world class golf competition. Although nothing has been stated with certainty it seems likely the greater Denver area will be placed on the unofficial rota for future BMW events.

Cherry Hills is also showing interest in trying to reassert itself as a major league 21st century venue capable in hosting future major championships, after having held the U.S. Open in 1938, 1960 and 1978 along with two PGA Championships in 1941 and 1985.

The Denver area represents the center point for all of the Mountain Time Zone—the often forgotten geographical area between east and west coasts. Given the rotation scheme now used it seems likely the Denver area can be plugged in similarly to what other sites are doing now for the Playoffs. The PGA Tour benefits by keeping the overall fan base excited and, at the same time, not wearing out its welcome by being at one location continuously.