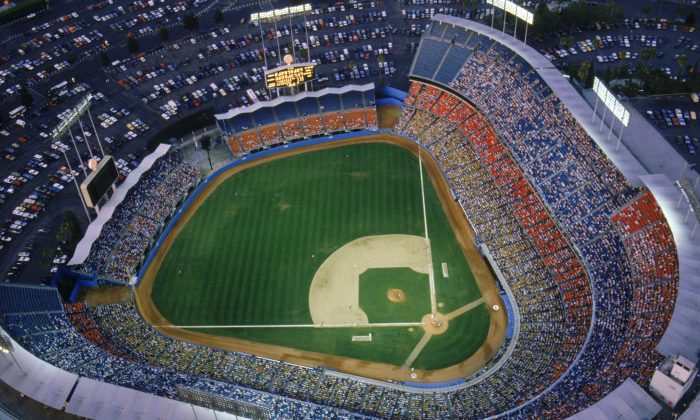 File photo showing a general view of Dodger Stadium, home of the Los Angeles Dodgers during a game in the 1990 MLB season at Chavez Ravine in Los Angeles, California. (Getty Images)
Crime and Incidents

A woman died as a result of being struck in the head by a foul ball at a baseball game in August of last year, according to a coroner’s report obtained by ESPN.

Linda Goldbloom was celebrating her 79th birthday and 59th wedding anniversary at Dodger Stadium on Aug. 25 when a ball hit by a San Diego Padres player flew over the protective netting and struck the woman in the head.

“Ushers came down and asked if she was all right, and she said no, then EMT came and rushed her to the hospital—she threw up in the ambulance,” Goldbloom’s daughter, Jana Brody, told ESPN.

The mother of three and grandmother of seven was rushed to the hospital for treatment. For three days, Goldbloom was unresponsive, Brody said, except when a nurse saw her move one finger one time upon being asked if her name was Linda. Her eyes never opened at the hospital, and a ventilator kept her breathing.

The coroner’s report cited by ESPN states the cause as “acute intracranial hemorrhage due to history of blunt force trauma” and notes that she sustained the injury when she was hit in the head with a baseball.

ESPN reported that the accident happened in the top of the ninth inning when a San Diego Padres batter fouled a pitch toward the first-base side of home plate. The trajectory of the ball was such that it cleared the protective netting and struck Goldbloom’s head.

Goldbloom was said to be a longtime Dodgers fan and was at the game celebrating her birthday and wedding anniversary with her husband, Erwin, brother-in-law Michael, and sister-in-law Eve.

The Dodgers said in a statement that the team was “deeply saddened” by Goldbloom’s death.

A spokesman for the Dodgers provided the following statement, as reported by ESPN:

“Mr. and Mrs. Goldbloom were great Dodgers fans who regularly attended games. We were deeply saddened by this tragic accident and the passing of Mrs. Goldbloom. The matter has been resolved between the Dodgers and the Goldbloom family. We cannot comment further on this matter.”

Goldbloom’s daughter said she hopes to set up a fund in her mother’s memory to help victims of similar accidents and their families.

Instances of fans dying after being struck by balls leaving the play area are uncommon in baseball. In the 150-year history of Major League Baseball, there have been only two reported cases of such deaths.

The second instance of a fan dying after being struck by a ball was the case of Clarence Stagemyer, 32, who was hit in the head by a thrown ball on Sept. 29, 1943, at Griffith Stadium in Washington. Stagemyer, who was sitting in the front row of the stands when he was hit, died one day later, ESPN reported.

According to The Associated Press, last season marked the first ever that all 30 major league ballparks had expanded protective netting that reached to at least the far ends of each dugout.

A series of spectator injuries in 2017 prompted the push for expanded safety measures.

While incidents involving loss of life on the part of spectators at sports events are relatively rare, there have been notable cases of fan deaths.

A shocking sports death occurred on July 7, 2011, when a man attending a baseball game with his 6-year-old son fell 20 feet headfirst onto the concrete while trying to catch a baseball tossed to him by one of the players.

Shannon Stone, a 39-year-old firefighter from Brownwood, Texas, was still conscious after the fall and told paramedics his son was still in the stands, according to Business Insider. Stone was rushed to the hospital and later pronounced dead.

There have also been notable instances of mass casualties.

About 50 people were killed at a Port-Au-Prince, Haiti, soccer match in 2005, in what the Institute for Justice and Democracy (IJDH) in Haiti called a “massacre.”

The aim of the Play for Peace soccer game, sponsored by USAID, was to steer young people away from gang activity, but the peaceful match turned bloody when police and machete-wielding accomplices entered the stadium and began to target suspected criminals.

“Some people were shot and killed by police,” according to IJDH, citing witnesses and family members, “while others were hacked to pieces by the machete-wielding civilians.”

Anne Sosin, a human rights observer at the Institute for Justice and Democracy in Haiti, said: “These killings set a dangerous precedent. How can you explain police accompanied by individuals armed with machetes massacring spectators at a soccer match with UN troops standing by literally across the street?”