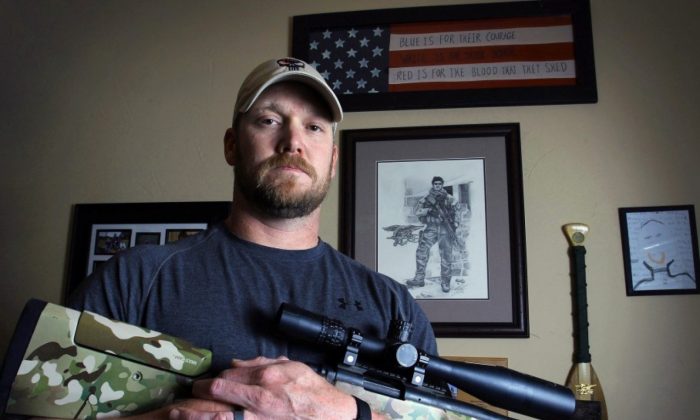 HOUSTON—Documents show the number of medals slain Navy Seal and “American Sniper” author Chris Kyle received is different than what he indicated in his book.

Navy documents obtained by an online magazine through an open records request show Kyle earned one Silver Star and three Bronze Stars with valor. In his best-selling book, Kyle wrote he had received two Silver Stars and five Bronze Stars.

A Navy spokeswoman confirmed the validity of the documents and says the Navy is investigating the discrepancy.

The Intercept first reported the discrepancy and posted the documents.

Kyle, regarded as the deadliest sniper in U.S. military history, was killed in 2013 at a Texas shooting range. A former Marine was convicted in his death.

ET Editor’s note: The Intercept broke the story, which read, in part:

During his 10 years of military service and four deployments, Kyle earned one Silver Star and three Bronze Stars with Valor, a record confirmed by Navy officials.

Kyle was warned at least once before American Sniper was published that its description of his medal count was wrong, according to one current Navy officer, who asked not to be identified because he was not authorized to speak about the case. As Kyle’s American Sniper manuscript was distributed among SEALs, one of his former commanders, who was still on active duty, advised Kyle that his claim of having two Silver Stars was false, and he should correct it before his book was published.