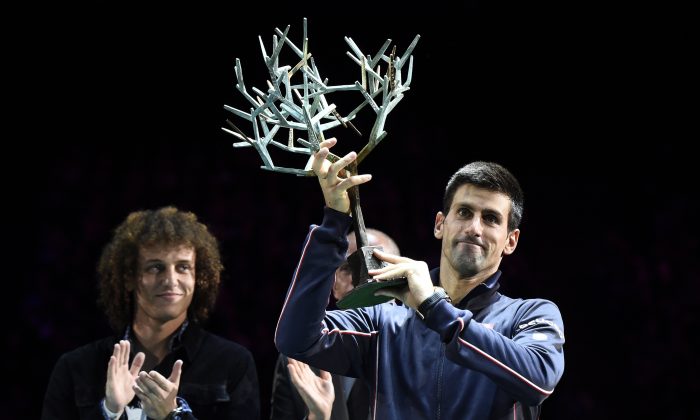 Djokovic Cruises in Paris to His 20th Masters Title

PARIS—New dad Novak Djokovic returned to the ATP tour for the Paris Masters and showed once again why he is the number one. The Serb won his 6th title this year, his 600th-career win and the 20th Masters 1000 title by beating Milos Raonic of Canada in 6:2, 6:3.

It was a classic match in the final, a big server Raonic versus the best returner in tennis, Djokovic. The 27-year-old was moving so well, felt very confident and kept control of the entire match. He got off to a fast start, didn’t loose his focus and with his defensive game and almost no mistakes, didn’t allow the Canadian to play his part in the match and to have a chance.

The World number one’s road to the final included victories over Kohlschreiber, Monfils, Murray, and Nishikori. He was pushed to a tiebreaker only once (against Monfils) and entered the finals spending an average of 1 hour and 24 minutes on court per match. He won the tournament without dropping a single set.

Djokovic is now 1310 points in front of Federer and looking very strong to finish the year as a world’s number one player.

Roger Federer had his chance to take over the number one spot, but lost to Raonic in the semifinals. He will now have to win in London at the World Championships to still have a chance at the number one spot. Federer said that even though he lost in Paris, he still feels very confident to win London, and that losing earlier at the Masters in Paris gave him an opportunity to prepare better and rest before the big event in the UK.

The race to London finally came to an end. In just a week’s time (Nov 9) the world’s top eight players will be heading to England for the ATP World Tour Finals at the London O2 Arena.