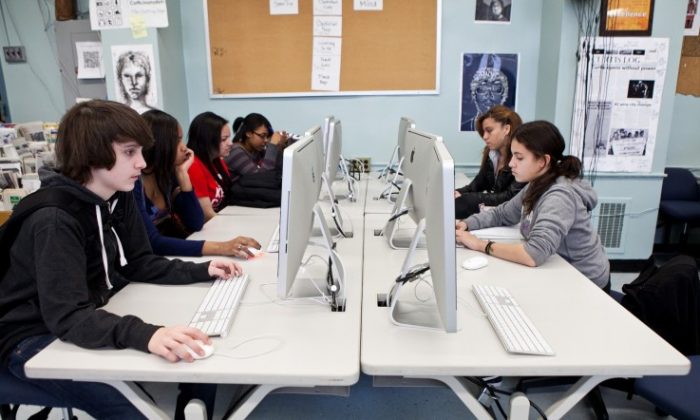 Students at Curtis High School on Staten Island use high-tech equipment in their journalism class. (Amal Chen/The Epoch Times)
US

NEW YORK—Projects chosen directly by voters through a participatory budgeting process were unveiled on Wednesday. A number of projects in four city districts received up to $500,000 in funding.

Participatory budgeting (PB) is the process in which voters in different districts directly decide how to allocate their tax dollars. This process is the first of its kind in New York City and the second in the nation.

Each representative councilor was allotted at least $1 million to the projects for his or her own district. Participating districts included districts 45 and 39 in Brooklyn, District 8 in Manhattan, and District 32 in Queens.

Winning projects in District 45, represented by Councilman Jumaane D. Williams, included installing security cameras in various locations throughout the district and floodlighting in the parks, which received $400,000 and $150,000 in funding respectively.

The constituents in Councilman Eric Ulrich’s district voted to renovate the Peninsula Library Branch, install a water pump for their Volunteer Fire Department, and implement technology upgrades in public schools.

More than 2,000 voters joined 27 public meetings this past fall and winter to create projects that addressed each district’s needs. After the initial ideas were discussed, volunteers reviewed and compiled proposals according to priority and submitted the projects for review.

Twenty-nine percent of PB voters were African-American, 20 percent were Hispanic or Latino; 64 percent were women; about half earned below the median income and 21 percent were born outside the United States.

“Our data found that participatory budgeting engages a diverse range of New Yorkers—many of whom are left out of traditional political processes or have never participated in community activism before—and builds concrete leadership skills, increases trust in elected officials and expands people’s social and political networks,” said Alexa Kasdan, director of Research and Policy for the Community Development Project at the Urban Justice Center, in a press release.

The participating districts will participate in PB again next year.