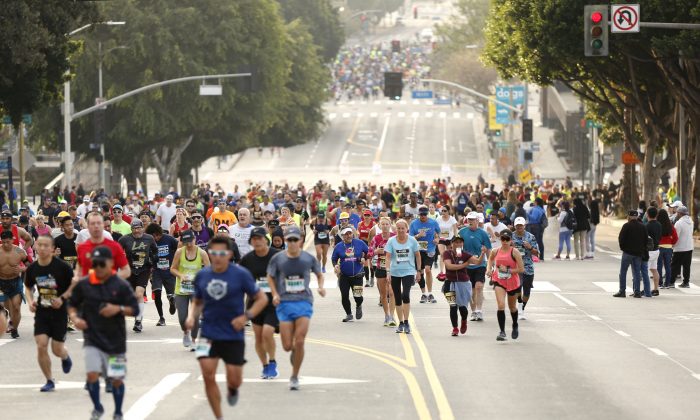 A record-setting runner dogged by allegations of cheating was found dead in the Los Angeles River, reports said.

The body of 70-year-old Frank Meza was found shortly before 10 a.m. in the Cypress Park area on Thursday, July 4, ABC7 Eyewitness News reported. No cause of death has been announced, but an official cited in the report said it is likely not due to drowning.

In March, Meza finished the L.A. Marathon with a time of 2:53:10, Runner’s World reported, which for his age would have been an incredible performance. It was over an hour faster than any other person in his age group.

This week, he was officially disqualified from the L.A. Marathon for allegedly cheating.

Meza’s extraordinary run raised the suspicions of marathon officials, who launched an investigation.

Officials cited by Runner’s World found one stretch of his run “an impossible feat during a marathon.”

The publication noted that some of Meza’s 5K splits from the run appeared unusual, with one of the 5K splits faster than the record for his age group.

Some people commenting on the Runner’s World Facebook post about Meza’s case suggested the splits—the time it takes to complete a specific distance in running—from this particular race may not have been that unusual.

“These are my splits from London marathon,” wrote one commenter, adding, “was probably a bit too cautious in the first half, but as you can see, I kept getting quicker and quicker towards the end as I became more and more confident I could hold the pace. I’m sure there is more evidence of cheating which isn’t being shown here, but his splits don’t make me that suspicious.”

“What you see is he comes onto the course after being along the sidewalk for an unknown period of time,” Murphy told the news outlet. “I looked back 6 minutes (on the video) and he was never on the portion of the course leading up to the sidewalk so it showed me he didn’t run that full part of the course.”

Meza consistently denied the allegations of cheating, saying he left the course in search of a bathroom. “I didn’t cut the course,” he told the Los Angeles Times.

In an interview with Canadian Running magazine, he admitted leaving the course but said he was innocent to cheating.

“What I can tell you is that I did not cut. My last few marathons I have had to step off the course, looking for a place to pee. I didn’t know this was against the rules, I was not aware of that,” he said. “I’ve done this several times. I’ve realized my problem is that I don’t hydrate properly. I have never cut the distance but I have stepped off of the course.”

He said he would consider using a GPS device to counter future claims.

“The next time I run a race I will use a Garmin. I’m pretty old school so I hadn’t used Garmin or Strava before, but I won’t ever run a race without it again. This is not my job. I don’t get paid for it. A lot of people don’t even know I’m a runner. I do this for fun, and right now this isn’t fun. Once I get over the shock and awe of all of this I would like to get back to my training.”

Meza told The Times he looked forward to running the 2020 L.A. Marathon in order to clear his name.

His wife, Tina, told The Daily Beast that the cheating allegations were devastating for the avid runner, a retired physician.

“Running was very important to my husband. He had been running marathons for the last 30 or 40 years. He was very fast, quite fast, and now unfortunately he won’t run marathons any more,” she said.

She told the publication that on the morning of July 4, Meza told her he was going out for a run.

The investigation into his death continues.