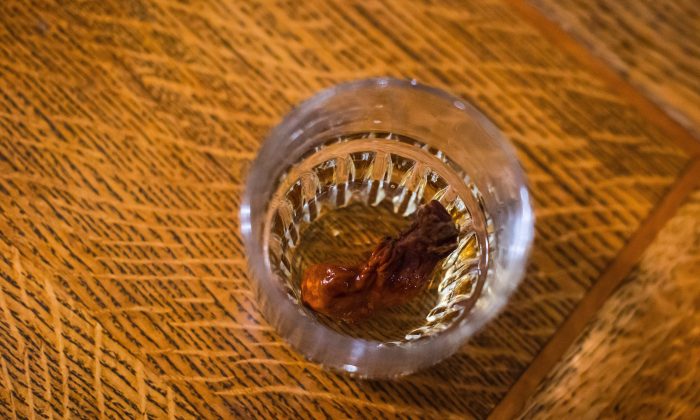 The Sourtoe Cocktail, a shot of whisky with a dehydrated human toe in the drink, is seen at the Downtown Hotel, in Dawson City, Yukon, on July 1, 2018. (Darryl Dyck/The Canadian Press)
Canada

DAWSON CITY, Yukon—A donation that an expert in Yukon happily describes as disgusting has arrived in Whitehorse, destined to become the centrepiece of a bizarre cocktail.

The frostbitten big toe of former British Marine Nick Griffiths now belongs to the Downtown Hotel in Dawson City after Griffiths donated the digit to the Sourtoe Cocktail collection.

The Bolton, England resident originally planned to donate three toes amputated in March 2018 after he suffered frostbite during the Yukon Arctic Ultra, a 483−kilometre race that follows the Yukon Quest trail.

Griffiths was in a Whitehorse hospital when he learned about the Sourtoe Cocktail from a nurse who had visited Dawson City, and he joined the exclusive sourtoe club by drinking a shot of whisky with a mummified human toe in it.

It’s now being mummified in rock salt in preparation for use in the cocktail, which has been served since 1973.

The hotel couldn’t be happier with what Gerle calls the “toe-nation,” saying in a statement that big toes are “hard to come by,” and will help ensure the sourtoe tradition continues.

Terry Lee, Toe Master at the Downtown Hotel said it will take about six weeks to mummify the toe in salt before it can be added to a cocktail.

“We have been waiting for a new big toe for a while so this is exciting news indeed,” Lee said in the statement.

“The big toes are the most disgusting and popular with the customers.”

Griffiths’s toes were amputated in England after he returned home from the 2018 race, but before the surgery he emailed the hotel and received an enthusiastic response to his inquiry about the donation.

“They wrote back and said they’d really love to have them and I would forever by immortalized in their hall of fame if I did,” Griffiths said at the time.

Gerle stands by that promise.

“It’s also extra special coming from Nick and we look forward to welcoming him to Dawson City where he can claim the rare distinction of shooting his own toe,” he said.

“The Downtown Hotel plans to bring Griffiths up later this summer after the toe is preserved and ready to go. They will foot the bill of course,” the hotel statement said.