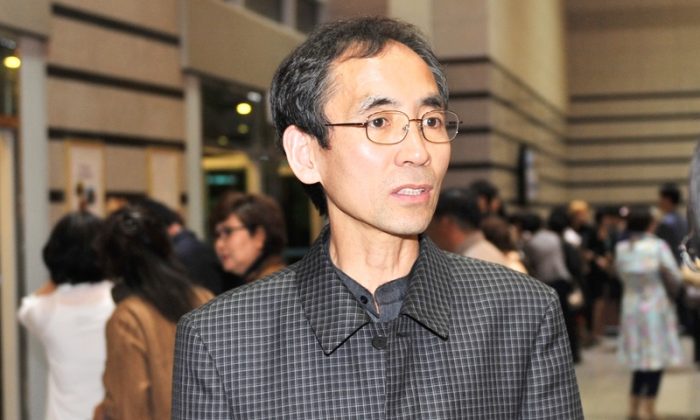 CHANGWON, South Korea—”The brilliant color on the backdrop projection and the dazzling color of the costumes contrast each other in a perfect way. I was most impressed by the program Handkerchief Blossoms. The beauty rendered me speechless,” said Gang Mun-cheol, a painter and director of Ulsan Museum.

He saw the New York-based traditional music and dance performance on April 30, at the Sungsan Art Hall Grand Theater.

“From the performance I saw the 5,000 years of Chinese history and its profound culture. The lively artists, the luxurious choreography and the magnificent background scenes, coming together made the entire performance especially memorable.

The backdrop is an animated projection that changes with every scene, moving the audience from celestial palaces to seaside villages, and allowing the performers to move seamlessly from stage to screen, and back.

“I saw the spirit of Truthfulness, Compassion and Forbearance in Shen Yun’s performance. [Shen Yun] shows you everything you need to know about Chinese culture. Watching Shen Yun is a great opportunity to understand Chinese history.”

Choe Chung-gyeong, director of GNS Gyeongnam steel and deputy director of Korea Chamber of Commerce and Industry, attended Shen Yun’s performance on April 30. “The scene that the celestial maidens descended from Heaven impressed me most. It feels like Heaven exists for real.”

“I can tell that Chinese culture is a divine culture from the stories. … The live orchestra skillfully synchronized with the story-telling on the stage. Live accompaniment is not easy yet Shen Yun blended it with the dancing artists’ movements and the background animation seamlessly. It is such a lively performance.”

“This is my first time seeing live accompaniment by an orchestra. This requires superb accuracy. It is magnificent the way they blend the Western and Eastern musical instruments. I have a new understanding of Chinese traditional culture through this performance.”

“[I ] hope that Shen Yun is known worldwide,” said Mr. Do Yong Bok after watching Shen Yun at Sungsan Art Hall Grand Theater on the evening of April 29, 2015.

This was his second year to attend Shen Yun. Mr. Do said, “The dancer’s were excellent, the high-tech animated backdrops were very vivid.”

“Particularly in the program about ‘Truthfulness, Compassion, and Forbearance’ [The Power of Compassion], I kept shedding tears, … I was left in awe as if electric currents had swept over me.”

“The display of 5,000 years of Chinese culture and history, though a thorough display in a short time is never easy. [Shen Yun] really touches me. Particularly, the Tibetan dance presenting the four seasons. Though there is no clear division of spring, summer, fall and winter, the costumes are perfect. The dance program is at a level higher than that of any stage play—extremely touching.”

“Such a precious performance is not available in China, only available outside China. I really can’t understand China. For China, it’s a real irony.”

‘Shen Yun is a large-scale perfect show of art’

“Shen Yun is a large-scale perfect show of art!” said Lin Ye Kyu, a professor of Kyungnam University and a doctor of literature. “Shen Yun dancers are able to strike the chord worldwide in people and bring people spiritual warmth and divine inspiration.”

Deeply impressed with the opening scene, Mr. Lin said, “Shen Yun vividly describes the origin of Chinese people, and allows the audience to have a quick understanding of it, and hence strikes a chord in them.”

“In less than ten minutes each, Shen Yun dances recount ancient myths, bygone heroes, or celestial paradises. Whether set in the past or in contemporary China, every dance embodies traditional Chinese values,” Shen Yun’s website says.

Mr. Lin said, “The show involves lots of myth-oriented dance programs as well as various themes, and reflects Chinese traditions and the profundity of 5,000 years of Chinese culture.”

In admiration of the backdrops, he said, “The high-tech animated backdrops are very excellent, very vivid, and perfectly integrated into the performance. For instance, in the program The Fable of The Magic Brush, as the fairy turns herself into a dragon flying high in the air, there is a very close connection between stage performers and the stage. These scenes deeply impressed me.”

Some of the dances relate stories about the current situation in communist China—the repression of people of faith. For this reason, Shen Yun is banned from the country. “I read the news that the persecution of Falun Gong by the communist regime is still happening. The news affected me profoundly,” he said.

He said, “Shen Yun presents the traditional Chinese concept of Heaven, Earth and Man, the current happening in China, and divine retribution for wrongs done. The in-depth presentation is really thought-provoking.”

“The ending scene of a Buddha rotating the Falun, the Buddha’s appearance in the air, or even right in front of me, really touched me,” he said.

He believed that “Shen Yun’s music and dance are able to resonate with people everywhere, to heal human minds and inspire them.”