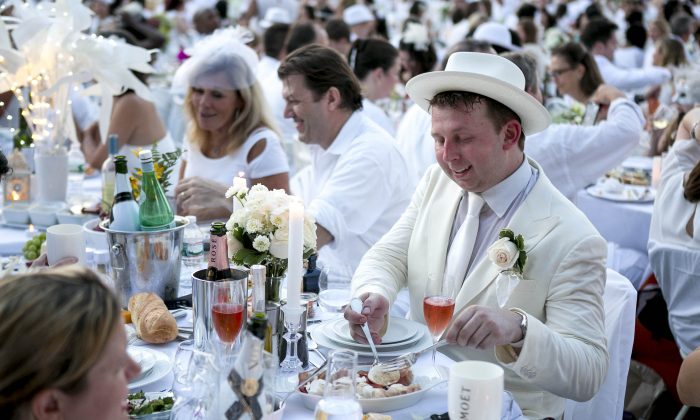 People attend Diner en Blanc (French for Dinner in White) at Nelson A. Rockefeller Park in Battery Park City on August 25, 2014. Approximately 5,000 people attended the pop-up dinner. The event happens once a year in New York and the location remains secret until about an hour before the dinner. (Samira Bouaou/Epoch Times)
New York

As the sun was setting, about 5,000 people gathered at the Nelson A. Rockefeller Park in Battery Park City, all dressed in white for a pop-up dinner on Aug. 25, 2014. Originally launched in France in 1988, the viral event Dîner en Blanc returned to New York for its 4th edition. The event’s location is kept secret until the last minute, when revelers, all dressed elegantly in white, converge from different parts of the city, with picnic ware and fare, and tables and chairs, at their appointed spot.