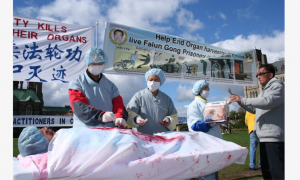 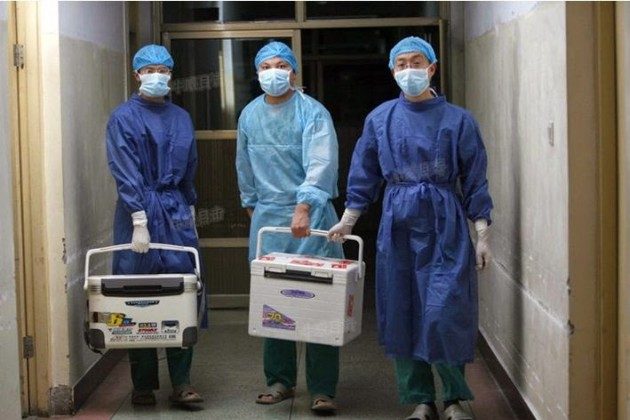 Chinese doctors carry fresh organs for transplant at a hospital in Henan Province on Aug. 16, 2012, in a screenshot from Sohu.com. (Epoch Times)
Opinion

Did Chinese Regime Implicate Military Doctor to Send a Message?

China’s state-run media recently reported a high-ranking doctor was involved in illegal organ harvesting. The report may have been exquisitely timed, or it may have been accidental. In China, it is sometimes hard to tell what exactly is going on behind the curtain.

The report in Legal Daily was published on July 28, the midpoint more or less of the six-day World Transplant Congress held July 26–31 in San Francisco. If the Chinese regime wanted to use a news story to defuse the attention directed at the crimes against humanity taking place in China, the timing of the story could hardly have been better.

The topic of the forced, live organ harvesting from Falun Gong practitioners in China drew more attention at this Congress than any previous one. The topic was raised on many occasions. It was said that at least 35 papers submitted by doctors from China were rejected by the review board for lacking information on organ sources.

Outside the Congress, Falun Gong practitioners distributed fliers educating the Congress participants and the public about the issue. Doctors Against Forced Organ Harvesting held several forums.

The July 28 article in Legal Daily lagged in publication. It was about a case in which the defendants had been tried in June and sentenced on July 25. The case involved a criminal ring that trafficked in kidneys.

What made the case special is that the illicitly obtained kidneys were said to have been delivered to Dr. Zhu Yunsong, who is the vice director of the Kidney Transplant Department at the General Hospital of the Guangzhou Military Region. Many of the transplantations involving organs taken from Falun Gong practitioners are done in military hospitals.

Dr. Zhu’s involvement in organ harvesting has been reported before. In April 2006, in a phone recording made by investigators, Zhu volunteered that he had organs from Falun Gong practitioners available for transplantation.

One doesn’t expect reports in Legal Daily to go off the regime’s message—it is the mouthpiece of the Chinese Communist Party’s judicial section. Whether this particular article was timed to coincide with the World Transplant Congress can’t be known for sure. However we have seen many cases of internal information selectively released in a well-calculated way during the investigations of the disgraced former Politburo member Bo Xilai and the former domestic security czar Zhou Yongkang.

While the Chinese regime usually doesn’t formally respond to the organ harvesting accusations made by Falun Gong practitioners, human rights groups, and the international community, in some cases the regime has responded, although not in an obvious way.

On Dec. 12, 2013, the European Parliament passed a resolution against organ harvesting in China. Eight days later, the official website of CCP Central Discipline Inspection Commission announced the removal of Li Dongsheng from his post.

The announcement was remarkable because of how it identified Li. Even though Li was well-known as a former high-ranking propaganda official and the then-vice minister of Public Security, the announcement began with two titles that are hardly known in China, much less out of China: the deputy chief of the Leading Group for the Prevention and Handling of Cult-Related Issues and the director of the Office for the Leading Group.

The sole mission of the Leading Group and its office, also known as the 610 Office, is the persecution of those who practice Falun Gong, a spiritual discipline. For the first time, these titles appeared in an official Party or government website or a media mouthpiece of the Party at the central level, even though the two organizations had been operating for more than 14 years.

Revealing that Li Dongsheng held those titles was very likely meant to respond to the European Parliament’s resolution or more general accusations of persecuting Falun Gong.

Since it was not necessary to reveal the titles of the most secretive and sensitive organizations in communist China for the past 14 years, organizations that most people had never heard of, the revelation in the announcement of Li Dongsheng being investigated was more likely meant to say: “Look, what you want is already there. We should not be blamed for what they did.”

Whether Legal Daily had Bloody Harvest in mind is not known. In any case, one thing about Legal Daily’s report can be said with certainty: A doctor whose alleged organ harvesting was exposed in Bloody Harvest would never have been reported as a criminal by state-run media when Li Dongsheng and Zhou Yongkang were in power.