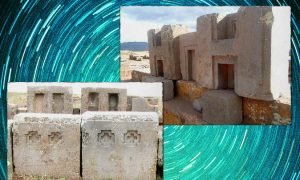 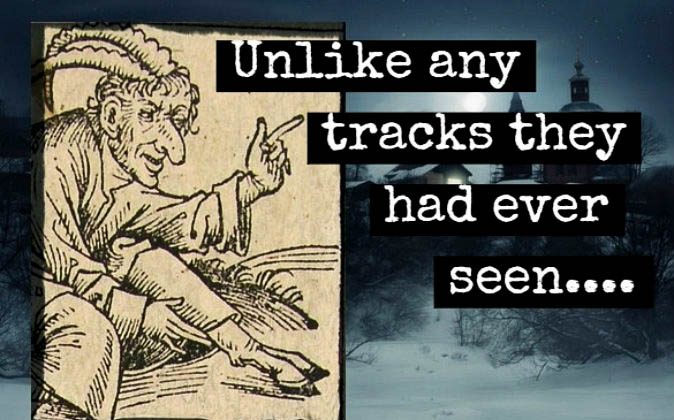 Devil’s Hoofprints Spotted in the Snow?

On Feb. 9, 1855, in the county of Devon, England, residents were mystified when they awoke to find strange tracks in the snow—tracks unlike any animal tracks they’d seen before. As groups of people across multiple villages spanning some 40 to 100 miles followed the tracks, curiosity turned to a mounting sense of horror and dread.

Some 4–5 inches long and in the shape of cloven hooves, they went up walls, across rooftops, from one side of objects inexplicably through to the other side. They seemed to sink so low in the snow, it’s almost as though they were hot and seared their way through. At spots, the tracks seemed to disappear, only to reappear some ways off, as though the being that made them had flown for a short stretch. The single-file prints suggested a biped.

In some villages, it seemed the maker of the tracks had visited nearly every home.

Was it animals? Was it a case of mass hysteria? Was it a trick played by some mischief-makers? Was it, as many believed, the Devil himself? No one really knows. Let’s take a look at the accounts, the evidence, and the possibilities.

The most extensive modern investigation of the so-called Devil’s Hoofmarks was undertaken by Mike Dash, an editor for Fortean Times. He collected all primary documents available, including tracings of the prints made by witnesses, the accounts collected by Reverend H.T. Ellacombe, who was vicar of the parish of Clyst St. George in East Devon from 1850 to 1885, newspaper articles from the time, and more.

He wrote in a paper titled “The Devil’s Hoofmarks”: “On the whole it appears that a considerable majority of the people who might have been expected to be familiar with all manner of trails left by the local wildlife, were puzzled and in many cases scared by these tracks and by the places in which they were discovered.”

Nonetheless, it seems that at least some of the tracks attributed to the Devil may have been made by animals. The night of Feb. 8 was an unusually cold one. But a thaw is said to have occurred partway through. The snow melted a little, then froze again when the temperatures dropped once more. This can distort animal prints, and some of the prints may have been made by hares hopping (the two hind feet can leave prints that may be mistaken for cloven hooves in single-file), or some other small animal. Claw marks were reportedly seen in some of the prints, suggesting little animal feet instead of hooves. In one account, the prints went through a drain pipe 6 inches in diameter. But, some of the other prints seem to defy this explanation and it may be that these regular animal prints were scrutinized alongside prints of a more mystifying nature.

MORE: Unravelling the Mystery of New England’s Day of Darkness

In Exmouth, a port town in East Devon, a witness named W. Courthope Forman said: “The footprints came up the front garden to within a few feet of the house, stopped abruptly, and began again at the back within a few feet of the building.” Others made similar comments about the prints crossing garden walls and other objects. In one case, the prints stopped on one side of a haystack and resumed on the other, without leaving a trace on top that anything had moved across it. Dash wrote: “Indeed the problem with assessing all the reports of prints found in strange places is a lack of full descriptions of their precise situation.”

Witnesses Reverend J.J. Rowe and R.H. Busk tell of how they followed the tracks with hounds. R.H. Busk said, “At last, in a wood, the hounds came back baying and terrified.” Rowe said: “The episode of the hounds … I well and distinctly remember.”Another man who followed the prints found a toad at the end of them, though it’s uncertain that a toad did or could make such marks.

The prints were found in two other regions that same winter.

Other Sightings of the ‘Devil’s Hoofprints’

In March 1855, they were sighted in Inverness, Scotland, where a local naturalist dismissed them as hare or polecat prints, according to an Inverness Courier report from that time.

In January 1855, near Wolverhampton, England, about 200 miles north of Devon, hoofprints were said to have appeared on vertical walls and the roofs of pubs. According to Dash, Elizabeth Brown, landlady of The Lion pub in this region, told a public meeting that “her house was mainly frequented by quarrymen and the tracks were nothing new to them. Similar hoofmarks were to be seen burnt into the rock at Pearl Quarry, on Timmins Hill.”

This brings us back to the reports that the footprints seemed to have been branded into the snow.

Similar descriptions have been given in other cases. In the Spring 1957 edition of Tomorrow, a Quarterly Review of Psychical Research, anthropologist and psychical researcher Eric Dingwall reported one such case. A business man named Mr. Wilson found perplexing prints on a Devon beach in 1950. They appeared to be hoofmarks, though not cloven. The stride from one to the next was some six feet—a stark contrast to the small stride of the 1855 Devon prints which were only 8–12 inches apart—and he noticed, Dingwall wrote, “that no sand was splashed up at the edges: it looked as if each mark had been cut out of the sand with a flat iron.”

Dingwall continued: “He had realized how totally inexplicable they were. For here was a biped with a track shaped like a hoof, starting immediately beneath a perpendicular cliff on a closed beach and ending in the sea. There was no returning track.” Dingwall asked Wilson if it’s possible that the animal, or whatever may have made the marks, turned right or left in the sea and returned to land elsewhere. “But Mr. Wilson produced photographs which showed that the beach was a comparatively narrow space completely enclosed by rocky headlands on either side.”

In the winter of 1957, Lynda Hanson observed hoofmarks in her parents’ garden. In a letter to Fortean Times editor Bob Rickard, she wrote that it had snowed about an inch overnight and in the morning she saw them, “shaped as a cloven hoof, 4 inches across, approximately 12 inches apart, in a straight line and stopping in the middle of the garden.”

She said dry concrete could be seen where the prints were, unlike with normal animal or human prints, which leave compressed snow.

In 2009, retired local government official Jill Wade of North Devon awoke to find prints in her yard, about 5 inches long, with a stride of 11–17 inches. She called in experts to investigate. Zoologist Graham Inglis told the Telegraph: “This is certainly a first for me. The footprints are peculiar, but they are not the devil’s … Personally I think it belongs to a rabbit or hare but quite an academic punch-up has started over it.”

Other explanations for the Devon prints—including an escaped kangaroo, a chain hanging from a weather balloon, and more—have been brought up and dismissed or deemed unlikely from various angles. As unlikely as the explanations may seem, it’s hard to prove or disprove any of them with certainty. Something unusual occurred in Devon, England, on the night of Feb. 8, 1855.

*Image of a snowy landscape at night via Shutterstock