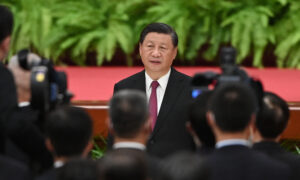 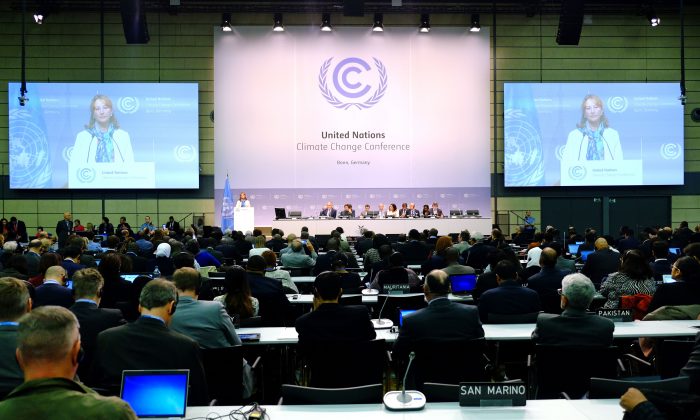 French Environment Minister Segolene Royal speaks during the opening ceremony of the Bonn Climate Change Conference as part of the U.N. Framework Convention on Climate Change (UNFCCC) in Bonn, Germany, on May 16, 2016. (Patrik Stollarz/AFP/Getty Images)
Opinion

Obama must explain how his actions do not violate Constitution

President Obama asserts that the United Nations Paris Agreement is “the first time so many countries had committed to ambitious, nationally determined climate targets.”

Yet the likelihood that China and other “developing country Parties,” the source of most of today’s greenhouse gas (GHG) emissions, will keep their targets is essentially nil. They don’t have to, according to the U.N. itself.

“The Parties to this Agreement,

The UNFCCC, signed by world leaders at the Earth Summit in Rio de Janeiro in 1992, is the foundation upon which all U.N. climate agreements, including that reached in Paris and signed at the U.N. on April 22, are based.

Article 4 of the UNFCCC states:

This means that, under treaties based on the UNFCCC, developing nations will keep their emission reduction commitments provided we pay them enough and give them enough of our technology.

And, even if we deliver everything we promise, developing countries clearly may ignore their emission targets if they interfere with their “first and overriding priorities” of “economic and social development and poverty eradication.”

Developed nations must keep their emission commitments no matter how it impacts their economies.

UNFCCC bureaucrats have not hidden this imbalance. They have told us over and over that “development and poverty eradication,” not emission reduction, takes top billing for developing countries.

Actions to significantly reduce GHG emissions in developing countries would involve dramatically cutting back the use of coal, the source of 71 percent of India’s electricity and 81 percent of China’s. As coal is the cheapest source of power in most of the world, reducing GHG emissions by restricting coal use would unquestionably interfere with development priorities. So, no matter what promise, developing countries won’t do it, eventually citing the UNFCCC in support of their decisions.

It has been suggested that the statement in the Paris Agreement that countries’ responsibilities will be decided “in light of different national circumstances” will impose tougher requirements on poor nations over time as they develop. This is naïve. The UNFCCC treaty, especially Article 4 that addresses the preferential treatment given to developing countries, has been the foundation of all U.N. climate negotiations. Developing nations will not allow this to change. Chinese negotiator Su Wei stated point blank at the U.N. 2014 climate conference that the purpose of the Paris Agreement is to “reinforce and enhance” the 1992 convention, not rewrite it.

On July 25, 1997, the Byrd-Hagel Resolution, passed unanimously by the U.S. Senate, asserted that America should not enter into any UNFCCC agreement unless it “also mandates new specific scheduled commitments to limit or reduce GHG emissions for Developing Country Parties within the same compliance period.”

At the time, the Senate was examining the Kyoto Protocol, a treaty in which the gross imbalance between developed and developing countries’ responsibilities was clear. It is not so clear in the Paris Agreement, but it is there none-the-less, hidden in the convoluted language of U.N.-speak.

The UAE Wants to Build a ‘Rainmaking Mountain’—Are We All OK With That?

When the Senate ratified the UNFCCC, the Foreign Relations Committee reported that future emissions targets agreed to under the Convention “would have to be submitted to the Senate for its advice and consent.” Obama plans to ignore this directive concerning the Paris Agreement since he knows the Senate would reject it.

Article II Section 2 of the Constitution asserts that the president “shall have power, by and with the advice and consent of the Senate, to make treaties, provided two thirds of the Senators present concur.” Senator Mike Lee (R-Utah) and Representative Mike Kelly (R-Pa.), the authors of a concurrent resolution in the House and Senate that the Paris Agreement must be submitted to the Senate before ratification, maintain that Obama’s actions violate this part of the Constitution.

The president has some explaining to do.