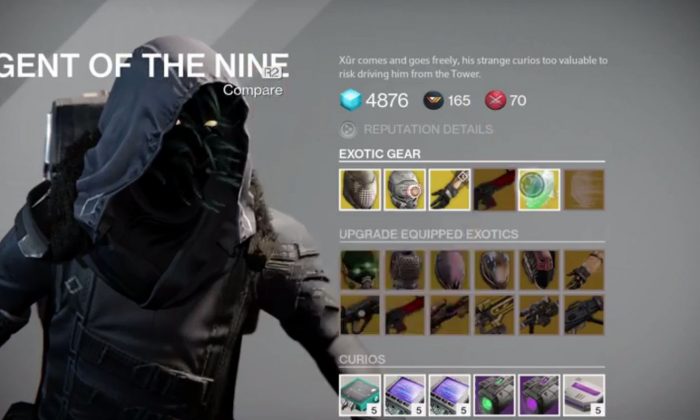 The location for Destiny’s Agent of the Nine, Xur, was revealed Friday (March 13) as well as the items. (Destiny screenshot)
Gaming

The location for Destiny’s Agent of the Nine, Xur, was revealed Friday (March 13) as well as the items.

He’s in the is at the North Tower by the back near the Masters.

It’s worth noting that with the time-zone change to Daylight Saving Time, it impacts what time Xur comes on. He’ll appear an hour later than the previous week. He will shows up at 2 a.m. PDT / 5 a.m. EDT.

Here’s some of the items that are worth buying from Xur:

– Claws of the Ahamkara

According to PlayStation Lifestyle, “Players can grab the awesome Red Death pulse rifle, which boasts the impressive ability to heal you with each kill. Also, Heavy Ammo Synthesis is yet again available for those looking to take on the harder Strikes and Raids.”

Here’s some of the upgrades:

Meanwhile, according to GamingBolt, Xur can’t be data mined due to a bugfix.

“Now a small hotfix is live in the game which didn’t add any features, instead if tweaked Xur. One Data miner said, ‘Instead of Xur having one single constant IP on one port, he now has multiple.’ This makes locating and mining the relevant information quite a bit more tricky, but with Xur’s stock becoming illusive, the information for Nightfalls and Weekly’s is thought to still be available,” the site says.