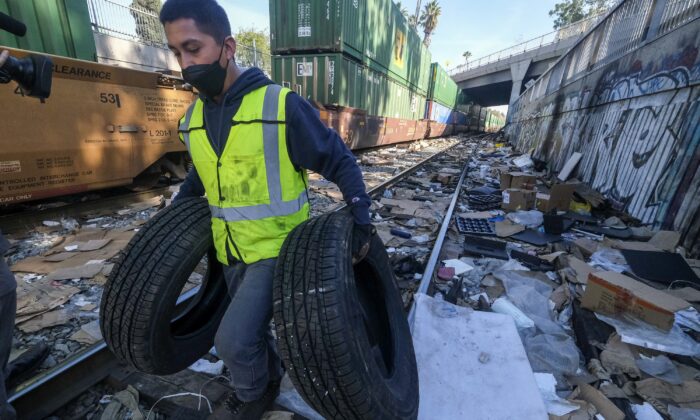 Union Pacific (UP) threatened to end rail traffic through Los Angeles County in response to widespread train burglary, but it has deferred a decision for the near future.

The company told The Epoch Times that it would continue to work with Los Angeles law enforcement over the issue for several months.

“We brought in dozens of Union Pacific special agents from across our 23-state-network during the peak season months of 2021. We continued to keep that increased presence in LA over the last several months,” the company’s statement read.

The statement follows a response from Los Angeles District Attorney George Gascon that blamed UP’s own security failures for the rise in theft.

“Felony and misdemeanor cases are filed where our office is presented with enough evidence to prove that a crime was committed,” Gascon said.

Earlier in the letter he said that between 2020 and 2021 only 103 theft cases were filed. Gascon said that the number of train burglary cases filed has decreased every year since 2019.

But an earlier letter from UP stated that after more than 100 train burglary arrests in the past three months the company has never been contacted for court proceedings. The letter also said the district attorney’s office had failed to prosecute train burglars when they were arrested.

If UP’s real problem is that criminals aren’t being prosecuted by Los Angeles’ justice system, it remains unclear whether more arrests will help long-term.

However more security may be sorely needed, according to an anonymous UP worker, who told the L.A. TACO that the railroad laid off between 42 and 52 of its own police officers.

“It is very telling that other major railroad operations in the area are not facing the same level of theft at their facilities as UP.”

The company’s statement concluded that, “Recent events have underscored the need for continued partnership with law enforcement, elected officials, customers, and companies to address this issue and move forward together.”

But judging the differences between UP’s original letter and Gascon’s response, two of the most important partners have very different understandings of the situation.

For UP leaving Los Angeles County is a nuclear option. The county contains America’s two largest ports and the railroad’s withdrawal will add to massive port backlogs.

Currently it serves three of the Port of Los Angeles’ five major railyards and plays a major role in getting containers out of Long Beach.

But according to railroad expert Randal O’Toole, UP’s pullout option would have been an act of mutually assured destruction.

“I’m not sure that’s a viable threat,” he said. “I don’t think any other port could handle that volume of stuff.”

Los Angeles County has America’s two largest ports, which together ship nearly 9.2 million 20-foot containers in 2020. The West Coast ports of Oakland, Portland, Seattle, and Tacoma combined only shipped about 5.7 million containers in the same year.

“I’m not sure what UP gains by actually leaving,” O’Toole said.

But by threatening to leave UP can pressure the local sheriff’s office to put a higher priority on train burglary, O’Toole said.

Whatever the root causes of rail theft they don’t seem to impact UP’s competitors, he said.

The BNSF Railway also passes through Los Angeles, but doesn’t have the same problems.

BNSF’s success may come from the fact that it uses a different route, O’Toole said. It also might have less congestion on its tracks.

“If I were Union Pacific I would think about putting up fencing in the corridor to keep people out. I would also think about making sure the trains never stopped in that corridor.”