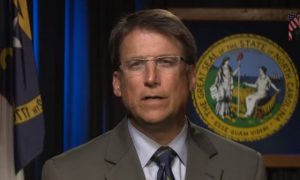 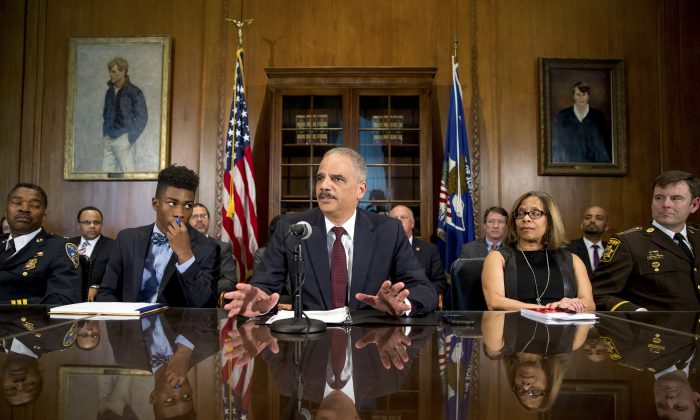 Attorney General Eric Holder, center, at a press conference held at the Department of Justice on Thursday, March 12, 2015, in Washington, D.C. (AP Photo/Andrew Harnik)
US

Attorney General Holder Wants Felons to Have the Right to Vote

Unlikely allies joined together for a common cause Thursday: from the staunch conservative and former U.S. House Speaker Newt Gingrich, to the Democrat U.S. Sen. Cory Booker. Advocates, politicians, and organizations from both sides of the political spectrum convened in Washington, D.C. to put heads together on how to reform our criminal justice system.

The bipartisan summit was organized by the group #cut50, whose goal is to reduce the country’s 2.2 million incarcerated population in half within the next 10 years, and Gingrich.

Topics of discussion ranged from how to improve police-community relations, to programs that keep children out of jail and prison.

U.S. Attorney General Eric Holder, who is due to leave office in the coming weeks, made special remarks at the day-long conference. The country’s top law enforcement official spoke of many failed policies that he felt made the system less fair and equal for Americans—from zero tolerance school policies that bring students to the police station for breaking rules, to the disparity in prison sentencing for people who are found with crack cocaine versus powder cocaine.

But Holder spoke most emphatically about something he has frequently vocalized throughout his six-year tenure: the loss of the right to vote for people convicted of felonies.

He called the disenfranchisement of felons a policy that is “at odds with the more equal justice system that the country deserves,” an additional barrier to normalcy that people released from prison face upon re-entering society.

He noted the policy’s disparate impact on the black community: 40 percent of the 5.8 million Americans prohibited from voting due to a felony conviction are black, which is about one out of every 13 African-Americans.

In some states, like Florida and Virginia, the ratio goes up to one in five African-Americans.

Holder traced the roots of the policy to the late 19th century, when the Fifteenth Amendment to the Constitution was just passed, allowing blacks to vote for the first time, while states began passing stringent laws to bar people convicted of crimes from voting.

Two states, Maine and Vermont, allow felons to vote, including while in prison. The other 48 states have different kinds of restrictions on felons serving time in prison, on parole, or on probation. Twelve states bar felons from voting even after they have finished serving their sentence, according to a policy paper by The Sentencing Project, a research and advocacy group.

During his term, Holder has continuously fought against voter ID laws that make it difficult for some minorities to cast their ballots. In 2013, the Supreme Court struck down elements of the Voting Rights Act that required federal approval of any changes to voting laws in states that historically discriminated against racial minorities.

After the decision, Holder vowed to continue monitoring states for any rights violations, “using every legal tool that remains available to us, against any jurisdiction that seeks to take advantage of the Supreme Court’s ruling by hindering eligible citizens’ full and free exercise of the franchise,” he said.

Holder said that he will continue to work for criminal justice reform even after he leaves office. “It’s a personal calling, but more importantly, it’s a moral imperative,” he said Thursday.