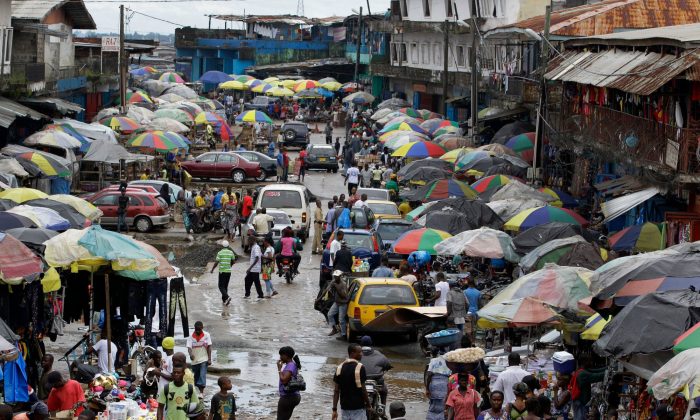 Monrovia, Liberia  –  As a Friday morning sun gradually beams its rays into the streets of Monrovia, hundreds of itinerant vendors began to show up in preparation to ply their daily trade.

While some chose to be mobile salesmen, hundreds of others would usually ply their trade on makeshift canopies, or simply sit along the dirty pavement of central Monrovia, as they scream out their sales pitches to the few potential shoppers that would often pass by.

These vendors are part of a larger tranche of Liberians that are reeling under extreme poverty, as they witness their country’s continuous free fall into economic turmoil.

The struggling vendors are mostly made up of impoverished young women, and young men who are victims of Liberia’s soaring unemployment, and continued economic woes.

As the morning progressed, the streets began to swell with more and more arriving vendors until the 10am sunshine made them look like a wavy collection of colored bubbling water in the distance.

Among them, in the hot bustling streets of Monrovia, Michael Tiani, a father of five, skillfully wheeled his oil painted barrow, filled with sealed-off plastic bags of water.
Desperately trying to seek out a living, he jostled for traffic among the other noisy vendors that graces the commercial district of Liberia’s capital city.

After repeatedly shouting “water, water” for more than three blocks, he abruptly brought his wheelbarrow to a halt, and paused miserably on the pavement to ponder his next move.

As channels of perspiration rolled down his darkened face, he wipes it away with the back of his left hand, sighs heavily, and showed a graphic look of frustration, which eerily complimented the already existent signs of hopelessness that was lingering in his eyes.

With his hands akimbo, he began to murmur at the fact that after more than two hours in the bristling sun, he was not able to sell nothing more than a single packet of water, that had raked in a mere 25 cents.

As his frustrated murmuring grew, two other roadside vendors instinctively blended in with him, and gradually began to pour a seemingly unified range of criticisms against the Sirleaf’s administration that is governing Liberia.

With real jobs currently almost non-existent in the country, compounded by the Government’s failure to actually create a qualified workforce, roadside vending seems to be the only career field for these struggling Liberians.

But while vending may be the order of the day, a reality check has revealed that Monrovia is practically overrun by more sellers than buyers, since most of the citizenry has effectively lost any real spending power.

Ravaged by more than a combined decade of two civil wars, many Liberians had initially casted their hope in the United Party Government that is led by President Ellen Johnson-Sirleaf, after the unceremonial departure of former President Charles Taylor.

This has since led most Liberians and sections of the international community to believe that the current Government has allowed itself to become overwhelmed by rampant corruption, nepotism, under hand dealings, and financial plundering.
In their view, Liberians are now economically worst off when compared to the tenure of Taylor or his predecessors.

While Pres. Ellen Johnson-Sirleaf was able to successfully maintain a well polished image on the international scene; taking a walk in the streets of Monrovia, and listening to the views of the average Liberian, seems to tell an entirely different story, while providing an image that is somewhat contrary to the way she is seen abroad.

Accused of corruptly offering up ministerial and other key state positions to dozens of her family members, undignified cronies and a well guarded cabal, locals are amused that President Sirleaf was able to “mismanage” the impoverished West African State almost without any challenge from the political opposition.

To make matters worse, it is widely rumoured in Liberia that key members of the opposition are probably silent because their hands were most likely greased with money from the government.

But while their silence seems obvious, and the signs of poverty is almost clearly visible to the naked eyes, some opposition supporters and members of the government are strongly disputing the existence of corruption in Liberia at the scale that is being described by most locals.

However, the vendors on the streets of Monrovia told this publication that like Michael and his struggles with his oil painted wheelbarrow, their experiences are genuinely much the same. As such, they are sticking to their stories, and are desperately hoping for a democratic change of better leadership, when they go to the polls in 2017.