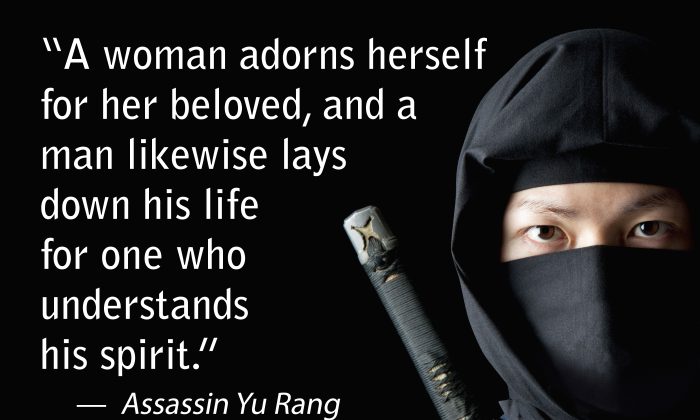 Tragedy invariably followed ancient Chinese assassins—even in the event of success, these fearless warriors expected no less than death upon attempting their missions.

Some of the most famous Chinese assassins were not, in fact, successful. Nevertheless, their courage and self-sacrifice landed them a place in the annals of history all the same.

In this second part on assassins from the Eastern Zhou Dynasty (770 B.C.–221 B.C.) of old China, we learn the story of a warrior seeking revenge for his murdered lord, and the tragedy of a butcher-turned-hit-man and his loyal sister.

Yu Rang was a minister for Earl Zhi Yao, who headed one of four families contending for power in the disintegrating Jin State of central China. His story is the third of five recorded in Sima Qian’s “Chronicles of the Assassins,” compiled during the Han Dynasty as part of his greater historical work.

Though Zhi Yao’s clan was the most powerful, he miscalculated and was defeated by the combined might of the other three families. Such was their hatred that Wuxu of the Zhao clan turned Zhi Yao’s skull into a wine goblet after killing him. Others say he used it as a toilet.

This did not sit well with the deceased’s minister, Yu Rang. Of all those he had served, only the late Zhi Yao truly understood him and appreciated his abilities. As far as Yu Rang was concerned, Zhi’s death and humiliation needed to be avenged at all costs.

Such was their hatred that Wuxu of the Zhao clan turned Zhi Yao’s skull into a wine goblet after killing him. Others say he used it as a toilet.

Hoping get close to his target, Yu Rang changed his name and took up a job as a servant in his adversary’s lavatory. He intended to lie in wait with a dagger until Zhao came to use the facilities, but precautionary measures foiled this first attempt.

Holding Yu Rang at sword point, Zhao Wuxu asked him why he wanted to kill him.

“I must avenge my lord Zhi Yao,” was the reply.

Zhi Yao left no descendants, so Yu Rang’s duty to his master should have come to an end. Seeing that this former minister’s devotion had not waned, Zhao Wuxu was moved and set Yu Rang free.

After this initial failure, Yu Rang redoubled his efforts. Since Zhao Wuxu already recognized him, he needed a new disguise. First, he disfigured his face, but that was not enough. His wife could easily tell it was him by his voice, so Yu Rang swallowed a block of charcoal, scarring his vocal chords and altering his speech.

His disguise complete, Yu Rang prepared an ambush for Zhao Wuxu by hiding under a bridge. Alas, this attempt too was derailed—Zhao’s horses sensed the danger, and, refusing to move further, prompted a search of the area. Zhao’s men apprehended Yu Rang.

“You once served the Fan and Zhonghang families,” Zhao Wuxu said to his captive. “They were eliminated by Zhi Yao, but you did not lift a finger to avenge them. What is the reason for your exceptional loyalty to Zhi Yao?”

But he would not release Yu Rang a second time. Instead, he took off his robe, and, handing it to his would-be assassin, let Yu slash at the fabric in place of his flesh. In this way, Yu completed his mission in gesture, if not in deed.

Encircled by Zhao’s soldiers, Yu Rang then took his own life.

Nowadays, when referring to Yu’s tale, people will often quote the assassin’s line:

“A woman adorns herself for her beloved, and a man likewise lays down his life for one who understands his spirit.”

Next in Sima Qian’s chronicles comes Nie Zheng, who lived in Han State, a territory that broke off from the once-powerful state of Jin.

Nie Zheng’s story would have been forgotten in history had things gone according to his plans. Wanted for murder, he was forced to go into hiding with his mother and older sister. For some time he lived life as a common butcher.

His good friend and government official Yan Zhongzi, however, needed Nie’s services. He had just reported Xia Lei, the counselor of Han, to the state’s lord for treacherous behavior, and feared retaliation. It was kill or be killed.

Knowing that Nie Zheng was a capable and enthusiastic fighter, Yan made extravagant efforts to recruit him, offering all kinds of riches.

But however good a friend Yan Zhongzi was or how much money he offered him to kill Xia Lei, Nie Zheng could not accept. He had to take care of his elderly mother to the end of her days.

Time passed, and eventually Nie Zheng’s mother passed away. He presented himself before Yan Zhongzi, expressing his gratitude for the respect with which the latter had treated him and his family during their previous meetings. Now that his filial duty to his parents was complete, Nie Zheng could serve Yan without qualms.

Nie Zheng’s approach to his mission could hardly be simpler. Knife in hand, he simply barged into Xia Lei’s residence, cutting down the statesman and those around him. Job done. Then Nie Zheng committed suicide, taking care to mutilate his face beyond recognition before stabbing himself in the gut. A few deft strokes of the blade was all it took for Nie Zheng to destroy his identity.

Knife in hand, he simply barged into Xia Lei’s residence, cutting down the statesman and those around him.

The authorities were shocked and immediately demanded to know the identity of this spontaneous killer. The body was displayed at the city market: anybody who could accurately identify it would be rewarded with a large sum of gold.

Enter Nie Zheng’s elder sister, Nie Rong. Hearing the news of the assassination, she instantly knew her brother was the perpetrator. She also knew that he had let go of his own aspirations to protect her.

While on the surface Nie Zheng accepted Yan Zhongzi’s request out of loyalty to a friend, he had really wanted to become a hero. For his sister’s sake, however, he opted not to leave his name in history.

Nie Rong would not have any of it. In grief, she came to the market and firmly declared that the corpse was her little brother. Then she revealed the entire story of Nie Zheng, from his initial refusal to carry out the deed out of filial duty, to his eventual decision out of loyalty to Yan Zhongzi.

Overcome with shock and grief, Nie Rong let out three resounding cries, and fell lifeless to the floor where her brother lay.

The integrity with which members the Nie family treated each other became famous among the fractured territories of the Eastern Zhou Dynasty, finally making its way into recorded history.

*Image of Assassin via Shutterstock