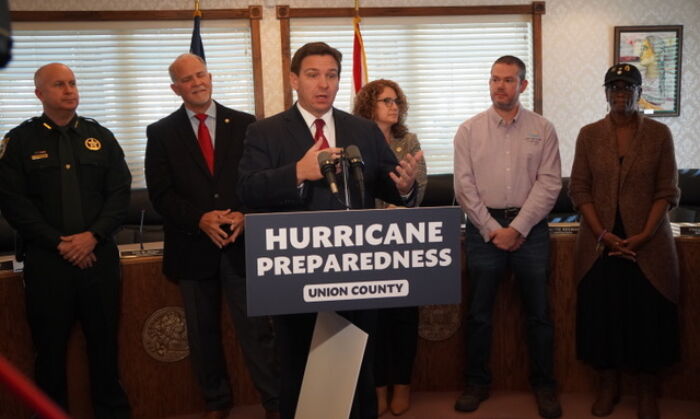 During a press conference about hurricane preparedness, Florida Gov. Ron DeSantis took aim on Jan. 7 at political opponents who chided him for using days off to accompany his wife to cancer treatment. Natasha Holt/Epoch Times
By Jannis Falkenstern

PUNTA GORDA, Fla.–Gov. Ron DeSantis said on May 31 that he is looking for someone with “military-style” leadership to head the newly re-established Florida State Guard (FLSG).

DeSantis wants someone who will lead Florida’s civilian force in a way that will assist and support state emergency response agencies. The Director of the FLSG will be responsible for 400 guard members, oversee recruitment, training, and mobilization of the guard in the event of an emergency.

“The ideal candidate will have demonstrated experience in military-style operations, emergency management, leadership and problem solving,” the statement from the governor’s office read.

On Dec. 2, 2021, the governor,  a U.S. Navy veteran, announced that he was bringing back a 1941 concept for 21st century Florida.  The state guard was formed in 1941 during World War II to fill in for the Florida National Guard when they were deployed and was disbanded in the late 1940s.

The Florida Department of State website described the inception of the Florida State Guard during World War II:

“In 1939, the Florida National Guard consisted of more than 3,000 volunteers. In 1940, after the fall of France and the commencement of the Battle of Britain, President Franklin Roosevelt urged Congress to increase military spending, institute the first peacetime draft in American history, and federalize portions of the National Guard. Florida’s National Guard was called into active national military service between November 1940 and January 1941.”

The governor said he wants “to make sure we have the flexibility—and the ability needed—to respond to events in our state in the most effective way possible.”

That will require Florida to have access to, and use of, support in ways that don’t require the federal government, he previously stated.

The state guard would answer directly to the governor with no federal deployment, or missions, and would receive no federal money.

The governor has allocated $3.5 million for the program in the 2022-2023 fiscal state budget that has yet to be signed.  The funds will go to training and equipment.

“We want to be able to have a quick response capability and re-establishing the Florida State Guard will allow civilians from all over the state to be trained in the best emergency response techniques, and have the ability to mobilize very, very quickly,” DeSantis said during the December press conference.

The governor’s office issued a release announcing that the application portal is now open and is awaiting applicants.

Floridians interested in becoming a member of FLSF must be between the ages of 18 and 60 and are required to meet the same standards as the Florida National Guard. The FLSF is a voluntary force and will assist the National Guard during natural disasters including hurricanes.

“We are proud of our veterans and active-duty military members and proud of what our communities do to support them,” he said in December.