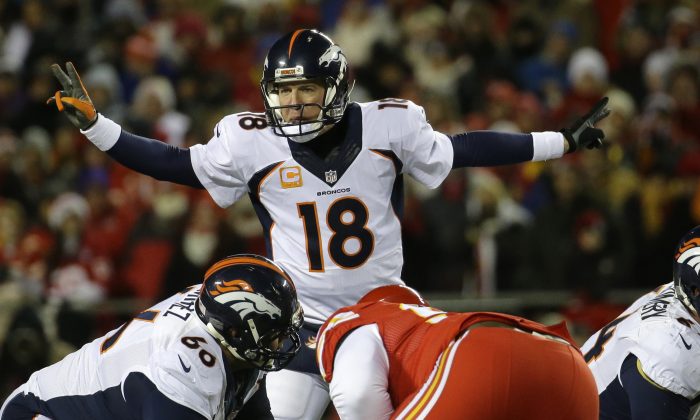 After last week’s win over the Chiefs, the Denver Broncos will play the Buffalo Bills at Mile High Stadium on Sunday.

Peyton Manning said that he changes the channel whenever he see himself in a commercial.

“I change the channel immediately,” he said, via The Denver Post.

“If other teammates are in the room, I run out of the room. I don’t want to hear the abuse coming my way. I don’t watch a ton of TV so I don’t see a lot of it but that is what I do, I change the channel. Nobody should be caught watching themselves on a commercial.”

He added that his teammates trolled him when chicken parmesan sandwiches were served.

“They served (chicken parm) the other day in the cafeteria and Mitch Unrein sang the little jingle tune and he said he just couldn’t help it,” Manning added. “It was a layup. I just served it right up to him.”

Even though CJ Anderson has been on a tear recently, it might not be the best idea to start him on fantasy.

The team has the second best scoring defense and seventh best defense against the run, surrendering only 96 yards per game total.

And with Manning at QB, it’s hard to imagine the Broncos relying heavily on the run game.

“Everybody wants to talk about it and throw you in there, give you so many points. It’s just not real,” Anderson said, via the Denver Broncos website. “What’s real is what we do every day on that football field. I just try to go out there and help my team win.”

Brandon McManus was promoted by the Broncos again this week from the practice squad.

However, he’ll be the team’s kickoff specialist.

He was cut earlier this season after performing poorly in kicking field goals.

Connor Barth was signed last week and went five for five on field goals. However, he was 0-8 on touchbacks, according to CBS.

Wes Welker or Emmanuel Sanders will take his role.