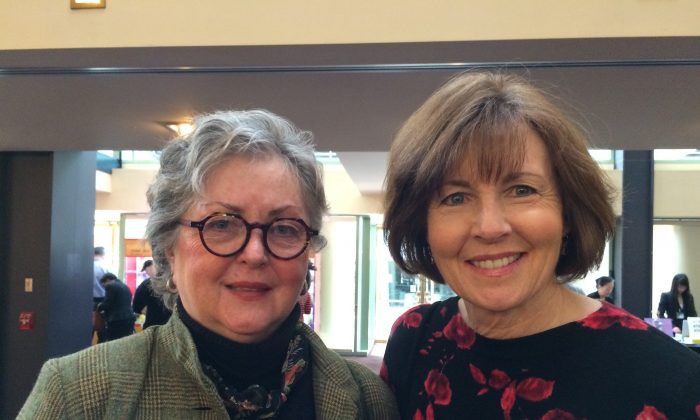 DENVER—When Dee Schranz learned what the name ‘Shen Yun’ means, she said it described exactly what she felt while watching the performance by Shen Yun Performing Arts.

“There’s just this feeling … you realize you’re seeing something special,” she said during intermission at the Buell Theatre, on March 8, 2015.

‘Shen’ means divine, and ‘yun’ refers to the spirit or expression that animates a movement. Yun—translated as bearing—is what gives the same movement a different flavor. The name Shen Yun translates into ‘the beauty of divine beings dancing.’

Ms. Schranz described this feeling as a gentleness and peace that washed over her.

“There’s a gentle being that’s there, a presence on the stage, that just transmits to me. … As [the dancers] move across the stage, there’s a lightness and a being to them and you can’t help but be drawn into whatever it is that they’re doing. So that’s the message to me—one of great peace,” she said.

Shen Yun is a classical Chinese dance company based in New York. Its mission is to revive China’s traditional culture.

As principle dancer, Jialing Chen explains in a blog on the Shen Yun website:

“China was once known as “The Celestial Empire” and “The Land of the Divine.” And Chinese mythology is filled with accounts of semi-divine beings coexisting with humans on Earth. … These deities are said to have left a rich culture of music, dance, and other arts. In fact, you could say we attribute all aspects of traditional Chinese culture to divine intervention. This includes Chinese language, attire, medicine, architecture… Ancient Chinese believed they were living in a land guided by the divine. They were living a lifestyle created by the divine.”

Since the Chinese Communist Party took over China in 1949, “many things have been lost. The generations that followed, and even Chinese living outside the mainland like myself—we grew up without a true sense of our heritage,” Ms. Chen said.

“I think the most important aspect of traditional culture is its moral compass and spiritual culture. Everything in Shen Yun revolves around these principles. When we perform, we want to give our audience more than short-lived excitement. We want to share with them something inspiring, the spirit of traditional China,” she said.

One of the key concepts in Chinese spirituality is that heaven, earth, and humans are connected.

This idea resonated with Faline Connelly, a veterinary technician and her mother, Emerenziana Digiorgio, a retired elementary school teacher.

“The connection that they said we have with earth and heaven, that all makes sense,” Ms. Connelly said.

“That is universal,” Mrs. Digiorgio said.

How to Revive a Culture

Ms. Connelly felt that inspiration and said the performance gave her “more appreciation for the Chinese culture.”

She and her friend Brenna Peters said the performance moved them to tears.

“It touches your heart. You can feel it. … I actually started tearing up at the first performance already,” Ms. Connelly said.

“I thought it was beautiful; it brought tears to my eyes, it brought laughs, I had goosebumps,” Ms. Peters said.