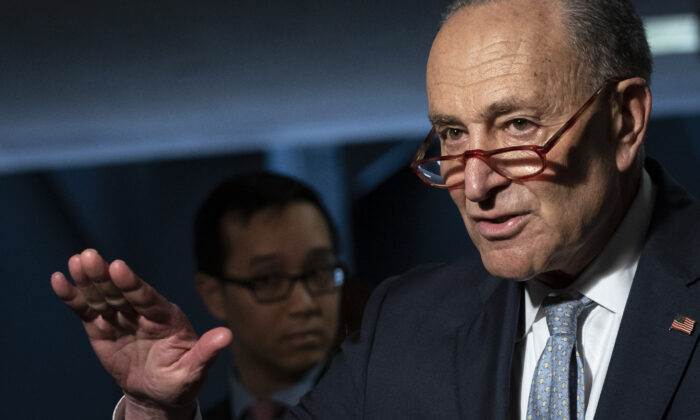 The Democrats are as addicted to politics, their version anyway, as a junkie in a homeless camp is to crack or meth.

It’s as if they mainlined Rahm Emanuel’s neo-Leninist apothegm—“You never let a serious crisis go to waste”—straight to their vena cavas and can’t get enough of it.

Now, that includes in a pandemic! What next? Nuclear war? Think of the possibilities! You could ask for almost anything—assuming there’s anybody left to ask.

But Emanuel’s watchwords (echoed recently by Rep. James Clyburn of South Carolina), it’s safe to predict, will prove to be a curse to himself and his party, rather than anything to live (or die) by.

When America’s most famously measured moderate—Republican Sen. Susan Collins of Maine—is angrily calling you out, you should know you’re in serious trouble!

But the Dems don’t seem to be listening, at least as of this writing, and remain determined to squeeze every molecule of advantage while the nation and its health care professionals suffer. They also risk fully tanking the U.S. economy and affecting the welfare of its citizens for years.

As they continue this behavior, they should be reminded of another apothegm more powerful and enduring (since 1968) than Emanuel’s—“The whole world is watching!”

And what the world is watching is a political party exploiting a situation out of a bizarre combination of habit and sleaziness, not to mention the ever-popular lust for power.

The habit part is knee-jerk ideology of the lib-progressive sort. It comes out like a computer program, albeit a moribund one. If this, then that.

Plug in virtually any code word—“workingman (or woman!),” “the people,” “corporate bad guys,” “Big Pharma” (you know, the evil folks working 24/7 to invent a vaccine against the new plague) and so forth—and the results spit out accordingly.

Example: Apparently one of the Dems’ demands was that airlines knuckle under to their carbon footprint strictures—this from the paleo-hypocrites who fly around endlessly in private jets. Who could’ve predicted it? (HINT: anyone breathing)

That the airlines could go bankrupt means little to them (until they need to go someplace).

The sleaziness part referred to above couldn’t be more obvious. In a time of crisis the likes of which we haven’t seen since World War II, the Democrats are playing politics as if nothing has happened. Just thinking about it makes you want to … wash your hands. (Hey, there’s a good side to everything.)

They are also exploiting the situation that more Republican senators have contracted the virus and are unable to vote, according to the peculiar recondite congressional rules. How creepy is that under the circumstances.

As I also noted above, this is a true addiction on the Dems’ parts, an addiction to politics, and as with most addictions, after a while, an intervention is the only salvation. We’re way past that “while.”

And I think it’s safe to predict that that intervention will come—at the ballot box. (Certainly not via the mainstream media who need an even more serious intervention.)

Come November, the Democrats are going to pay big time. I suspect they know it too and what we are seeing is a form of “acting out.” The childishness of what they are doing in the face of a pandemic is manifest.

Although it started earlier, this infantile behavior has accelerated throughout the Trump administration. Sooner or later, you reach a tipping point and have to put an end to it.

That point has been reached.