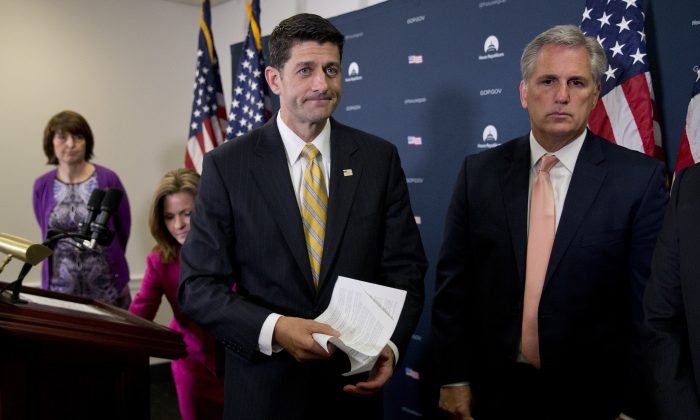 WASHINGTON—House Democrats and Republicans seem just as destined for an election-season clash over guns as they did before a Democratic sit-in on the chamber’s floor ushered in lawmakers’ July 4 recess two weeks ago.

Nearly a month after the Orlando mass-shooting catapulted the issue back onto the nation’s radar, the two parties were meeting separately Wednesday to map strategy.

Republicans have incorporated some gun curbs into a broader bill aimed at addressing domestic terrorism that the House has planned to debate this week, though their plans seemed less certain late Tuesday. Democrats are insisting on amendments tightening gun restrictions far further, which House Speaker Paul Ryan seemed to nix Tuesday, and each party says the other’s proposals are defective.

Ryan, R-Wis., met Tuesday evening with two leaders of the sit-in, Reps. John Lewis of Georgia and John Larson of Connecticut. The Democrats said Ryan listened respectfully and mentioned his party’s concerns about protecting gun owners’ rights, but made no promise to allow votes on the Democrats’ proposals.

Asked what Democrats would do if they are denied votes, Lewis, the civil rights hero, wasn’t specific but said: “There will be action. We will not be silent.”

Ryan spokeswoman AshLee Strong said the two parties “have different views on how to achieve a shared goal of preventing gun deaths,” especially over protecting gun owners’ rights. She said the next steps on anti-terror legislation “will be discussed and determined by the majority in the coming days.”

That seemed less assured than earlier comments from Ryan that the House would vote on the GOP legislation this week. Late Tuesday, Republicans were working to line up GOP support for their own measure, with some having questions about the bill’s procedural protections for gun owners and other concerns.

Despite the uncertainty, GOP leaders’ hopes of staging a vote on their proposal underscored the pressure they’ve felt since the June 12 mass shooting in Orlando, Florida, that left 49 victims dead. Since the 2012 slaying of school children in Newtown, Connecticut, Republicans have not brought any legislation broadly restricting guns to the House floor.

The House met tranquilly Tuesday for its first session since Democrats’ near 26-hour sit-in, which seemed to energize Democratic lawmakers and their gun-control allies. Dozens of Democrats delivered speeches championing firearms restrictions, but there were no disturbances.

Republicans, backed by the National Rifle Association, seem intent on preventing any limitations on the constitutional right to bear arms, which they say the Democratic measures would impose. They also said they were investigating Democrats’ behavior during the sit-in, including whether they intimidated House aides and damaged furniture.

Early Tuesday, Ryan suggested, without saying so explicitly, that he wouldn’t allow votes on those proposals.

“The last thing I want to do is incentivize these tactics,” Ryan said Monday on the “Midday with Charlie Sykes” show on WTMU radio in Milwaukee.

The GOP bill would bar many gun sales to terror suspects, but only if federal prosecutors could prove within three days that a terrorist act was afoot. The government would have to cover legal costs for people for whom it unsuccessfully tried to deny firearms.

“I can’t get my dry cleaning back in 72 hours,” said Rep. Jared Huffman, D-Calif.

That bill would also establish an office within the Department of Homeland Security to focus on what the measure calls “radical Islamist terrorism” within the U.S., and set up modest grants for communities trying to counter such threats.