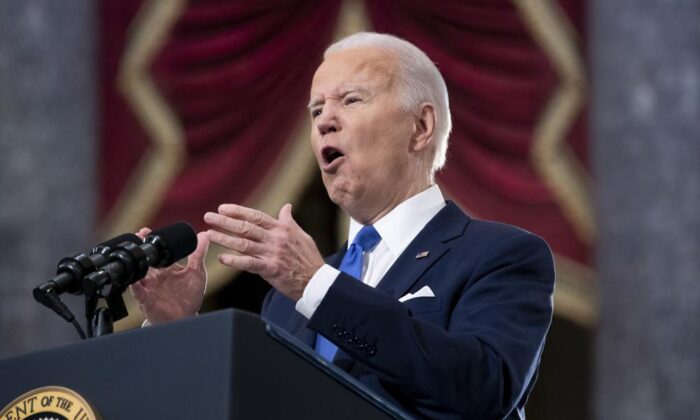 In a series of statements and memorials, Democrats worked to gain maximum political advantage from the first anniversary of the breach of the Capitol that occurred on Jan. 6, 2021. Republicans, who have a very different account of what happened, were mostly offstage.

“For the first time in our history, a president had not just lost an election, he tried to prevent the peaceful transfer of power as a violent mob breached the Capitol,” Biden said.

It was the first of 16 references to Trump made by Biden.

Then Biden declared that what he was about to say was “God’s truth about January 6th, 2021.”

“We saw it with our own eyes. Rioters menaced these halls, threatening the life of the Speaker of the House, literally erecting gallows to hang the Vice President of the United States of America,” he said.

“But what did we not see? We didn’t see a former president, who had just rallied the mob to attack—sitting in the private dining room off the Oval Office in the White House, watching it all on television and doing nothing for hours as police were assaulted, lives at risk, and the nation’s capital under siege. This wasn’t a group of tourists. This was an armed insurrection.”

Trump inspired the insurrection, Biden said, because the former president couldn’t accept that he had lost the 2020 election.

“And here is the truth: The former president of the United States of America has created and spread a web of lies about the 2020 election,” Biden said. “He’s done so because he values power over principle, because he sees his own interests as more important than his country’s interests and America’s interests, and because his bruised ego matters more to him than our democracy or our Constitution. He can’t accept he lost. … He lost.”

Just in case anybody missed his point, Biden also posted his attack on Trump to Twitter.

Throughout the day, Democratic leaders united in the unrelenting repetition of their narrative in which Trump and Republicans personify an evil that so threatens democracy that it can only be stopped by punishing the perpetrators and approving the John R. Lewis Voting Rights Advancement Act and the Freedom to Vote Act.

Missing from the memorials were Republican voices expressing different views and asking questions, such as why none of the hundreds of arrested Jan. 6 defendants have been charged with “insurrection” if that’s what took place that day.

“What happened on January 6, 2021 at the U.S. Capitol, in no uncertain terms, was an attempted coup by insurrectionists encouraged by Donald Trump’s violent, destructive, and treasonous rhetoric and behavior, that resulted in the deaths of U.S. Capitol Police officers and rioters, and injured many more,” Rep. Pete DeFazio (D-Ore.) said in a statement.

“Thanks to the evidence gathered by the Select Committee to Investigate the January 6 Attack on the United States Capitol, we are learning how perpetrators planned to achieve their coup and that the insurrection was planned at the highest level of government.”

According to Rep. Grace Meng (D-N.Y.), the day brought back the terror that she felt as the rioters swept through the Capitol.

“For hours, I was barricaded in a room off the House floor as the angry mob marched right outside my door,” Meng said in a statement. “I feared for my life and called loved ones asking them to pray for me as these insurrectionists, spurred by then-President Trump, stormed the halls of Congress.”

“The violence of January 6th did not appear out of nowhere,” Sanchez said. “It was spawned by a loop of fear tactics and lies that the former president and his enablers exploited to maintain their power. In the past 12 months, they have used this ‘big lie’ to justify making it harder for people to vote and easier to overturn election results.”

Approving the two election law reform proposals being pushed by Democrats will put an end to the conspiracy, Sen. Tim Kaine (D-Va.) told his Senate colleagues during a Jan. 6 memorial speech.

“As I have said before, unchallenged evil spreads like a virus. Trump’s ‘big lie’—that because he lost, there must have been fraud—animated the attack on Jan. 6 and has been spreading through our democracy and corroding it since then,” Kaine said.

“Certain states with Republican governors and legislatures have used that same lie to restrict voting access, disempower nonpartisan election officials, and even threaten jail time for Americans who help their neighbors vote.

“The state officials taking these steps may not have been storming the Capitol on Jan. 6, but they are using the same ‘big lie’ to justify disenfranchising our fellow Americans. The best way to overcome that and protect our democracy is by passing comprehensive voting rights legislation like my Freedom to Vote Act and the John Lewis Voting Rights Advancement Act.”

If the approval of those measures doesn’t end the Trump–Republican insurrection, a small but vocal group of congressional Democrats led by Rep. Jamie Raskin (D-Md.), stands ready with another solution—invoking Section 3 of the 14th Amendment, which forever bars from office those who “have engaged in insurrection or rebellion against the [Constitution],” according to The Hill.

Speaker of the House Nancy Pelosi (D-Calif.) refuses to make public the documents demanded by House Republicans concerning evidence that she delayed approving National Guard troops offered by Trump in the days prior to Jan. 6 to have ready to deploy in the event of trouble.

There are also growing demands among some congressional Republicans and conservative activists for an accounting of the alleged presence of multiple “protesters” in the Jan. 6 breach who are thought to have been law enforcement personnel operating as “plants” to instigate violence.