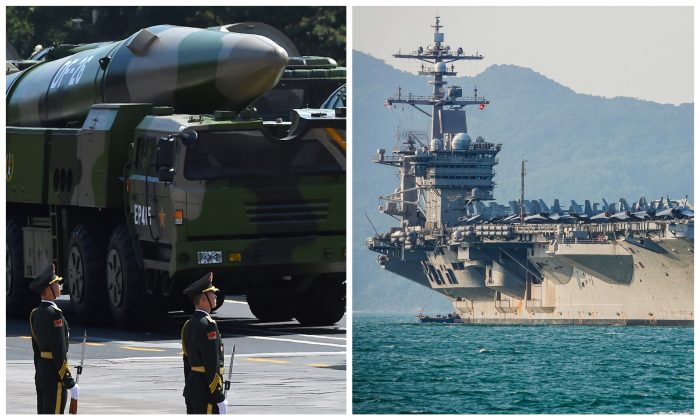 WASHINGTON—In an appearance at the Brookings Institution on Feb. 12, Rep. Seth Moulton (D-Mass.) gave remarks billed as the House Democrats’ vision for the future of defense policy. He also hinted at a future for himself that may include a presidential run.

Moulton has the experience to command respect as a party spokesman on defense issues. He served as a Marine captain in the Iraq War and has a seat on the House Armed Services Committee.

Moulton cast himself as a vigorous critic of the present administration. At the same time, he took positions more hawkish than has been the Democratic norm, calling for an aggressive stance toward China, and for a recommitment by the United States to Syria.

He framed his prepared remarks as “next-generation” thinking about “arms, arms control, and alliances.” He spoke in terms of the great power competition of the United States with Russia and China, and he criticized the United States for being out of step with our competitors’ advances.

For example, he described NATO carrying out tank drills as a response to Russian cyber attacks toward their European and former Soviet neighbors.

“You got the idea that Putin was sitting there and laughing about the United States’ response to their hybrid warfare in Eastern Europe in the form of tank drills,” he said.

And Moulton related how the Chinese are focusing on advances in artificial intelligence and 5G data networks, while the United States builds more aircraft carriers.

He warned that China’s “rapid development of technology, both defense and non-defense” is poised to leapfrog the United States technologically with investment in basic research, biotech, and artificial intelligence “quickly eclipsing our own.”

Pointing out that the cost of one U.S. aircraft carrier could supply China with 1,238 missiles capable of taking out that carrier, Moulton argued that the United States needs to “reexamine that balance” and its mismatched responses to Russia’s and China’s growing technological threats.

Moulton proposed a renewed pursuit of arms control, not just with “traditional weapons, but with new ones as well.” Speaking specifically to the Intermediate-Range Nuclear Forces Treaty between the United States and Russia, he described the impending U.S. withdrawal from it as an opportunity both to develop new cost-effective systems that were previously restricted under its terms, and to negotiate a new treaty that would include China.

Referring to his advocacy four years ago for a treaty that would have limited the proliferation of drones, Moulton declared “back then, we were still far ahead of the rest of the world in that technology, and limiting them may have solidified that advantage.” Gaining such advantages represents a “principle we need to pursue,” he said.

Regarding North Korea, he said the interests of the United States, North Korea, and China didn’t align, and such alignment was necessary for denuclearization to be possible.

He called for a “Pacific NATO to counter China.”

In the Middle East, Moulton favors U.S. intervention. He described a situation that was more “more disrupted and more disruptive” than when the War on Terror began. Nonetheless, “we can’t simply abandon places like Syria without any plan, because … we’ll just have to come back,” Moulton said. “For all of our wars, we need clear achievable missions, approved by Congress and transparent to the American people.”

Moulton confirmed during the question-and-answer session after the speech that he’s considering a presidential campaign run, as national security issues have “to be part of the debate.” His case for aggressively confronting Russia and China, and maintaining U.S. engagement in the Middle East, would firmly position him as a foreign policy hawk among the current Democratic presidential field and within an anti-war party.

However, his appeal as a national security candidate may prove limited to the more progressive, left-leaning Democratic primary electorate, which generally opposes foreign military interventions (most notably the Iraq War he served in).