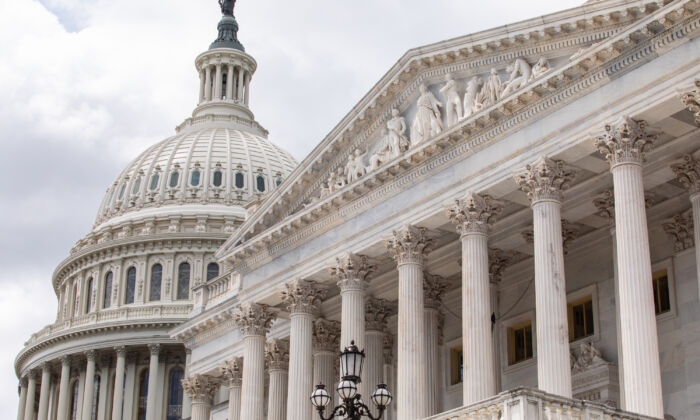 The chief of staff for Rep. Jake Auchincloss (D-Mass.) is stepping down.

Tim Hysom, who defaced posters put up by a member of Congress, has accepted a different job.

“Tim has accepted a position in another congressional office,” Auchincloss told The Epoch Times in an emailed statement.

“I appreciate Tim’s service in my office and wish him all the best in his new endeavor.”

It’s not clear which congressional office is set to hire Hysom.

Auchincloss has not yet picked a replacement.

“I am working to identify a new chief of staff and my team remains focused on delivering results and lowering costs for working families,” the congressman, who entered office in 2021, said.

The U.S. Capitol Police referred Hysom for a criminal referral after he was caught defacing posters put up by Rep. Marjorie Taylor Greene (R-Ga.).

The posters each stated: “There are Only Two Genders: Male and Female Trust the Science.”

Hysom placed stickers with Bible verses on them.

He was captured on surveillance camera, according to an affidavit obtained by Just the News.

U.S. prosecutors declined to pursue the charges, a spokesman for Greene previously told The Epoch Times.

The U.S. Attorney’s Office for the District of Columbia did not respond to a request for comment.

Matt Corridoni, a spokesman for Auchincloss, has defended his soon-to-be former colleague.

“Adhering a sticker—to a poster that shouldn’t be there in the first place—is hardly a federal crime. What Tim did was to adhere a series of stickers to foul, mean spirited, bullying posters outside the Congresswoman’s office. These stickers were never threatening and always respectful,” Corridoni told The Epoch Times in an email.

Greene later filed an ethics complaint against Hysom with the House Ethics Committee over what happened.

Greene said that what Hyson did “certainly falls into the realm of behavior which would be barred directly under any normal code of ethics,” urging the ethics panel not to condone Hyson’s behavior as acceptable.

“Such a precedent would lead to the endorsement that staff or Members may violate the property of others whenever their party happens to be in the Majority,” she said.

The panel, led by Rep. Ted Lieu (D-Calif.), does not comment on potential investigations. It periodically announces the results of probes it has launched.