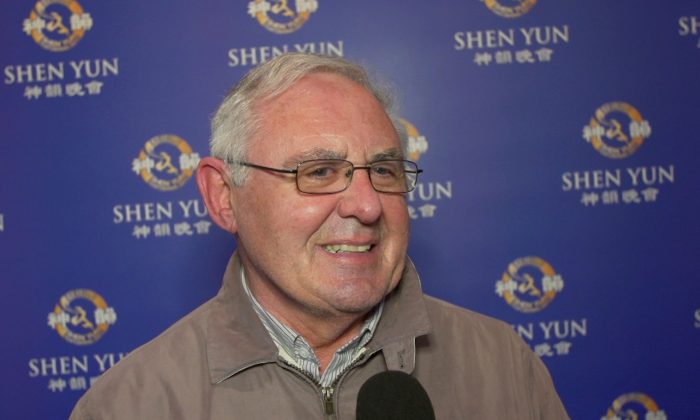 “This particular show was fantastic, especially with the digital presentations, as well as the dance. The music was just fabulous,” he said.

The digital backdrop Mr. Flanagan mentioned extends the stage and brings the scenes from China’s 5,000-year-old culture and the heavens to life.

The New York-based company presents stories from China’s history and legends as well as heavenly scenes, since the country’s culture is held to be divinely inspired. Each year’s performance has a wealth of material to draw from.

Shen Yun’s website explains: “Mortals and divine beings merge on stage as one. Principles such as benevolence and justice, propriety and wisdom, respect for the heavens, and divine retribution, all come to life, washing over the audience. Originating from Confucianism, Buddhism, and Taoism, these ideals are the essence of traditional Chinese culture.”

Mr. Flanagan describes the message he understood from the performance: “Kindness, or the understanding of each other, the unity—it was very moving.”

“I was very, very impressed,” Mr. Feit said. “I was amazed that so many people could move in unison, like one organism.”

He was interested in the classical Chinese dance form.

The Shen Yun website describes classical Chinese dance: “Soaking up profound wisdom from every era and dynasty, it has become a complete system of dance embodying traditional aesthetic principles with its unique dance movements, rhythms, and inner meaning.”

He added: “I thought it was remarkable, I loved it very much.”