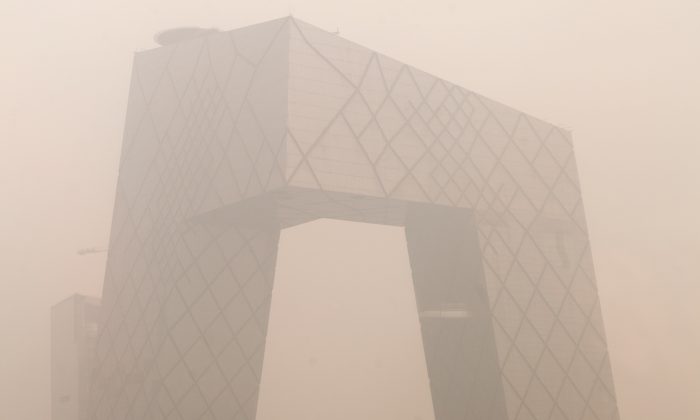 Heavy pollution surrounds the China Central Television (CCTV) headquarters building in Beijing on Jan. 18, 2012. No announcement has been made about CCTV's New Year Gala next year, leading to speculation that it may have been axed amid scandal at the broadcaster. (Ed Jones/AFP/Getty Images)
China

Every year by July, or at the latest August, Chinese state media will have announced with much fanfare who will be the next director of the China Central Television New Year’s Gala, the Chinese Communist Party’s premiere annual propaganda fest, in which pro-regime messages are wedged between tacky punchlines and excessively sequined gowns.

As of halfway through September, however, there has been not a word from CCTV about the Gala—raising questions and speculation in the press that perhaps the event won’t be held in 2015.

“It is not something in progress,” said a Ms. Ding, who is responsible for the promotion of the Gala, according to the Beijing-based Jinghua Times. When pressed by the reporter about whether the Gala has been canceled for 2015, she said she had no comment.

“There isn’t any news. It hasn’t begun. Now, I don’t have any comment … I haven’t heard anything about a cancellation,” said Li Xinyan, the office director of CCTV, according to Peng Pai, a new state-funded online media outlet.

One line of speculation seeking to explain the delay says that CCTV may have been far too busy dealing with a slew of corruption and sex scandals this year, and with the high-profile arrests of former CCTV deputy director Li Dongsheng, former director of the Financial Channel Guo Zhenxi, conspicuous news anchor Rui Chenggang, and deputy director of the finance channel Li Yong.

Hundreds of CCTV staff have been interrogated and many were dismissed and arrested for their roles in assisting these individuals.

Li Dongsheng, in particular, was reported to have used his position at CCTV to peddle young, attractive female television hostesses and reporters to high-ranking Communist Party officials, including, it was alleged, Zhou Yongkang, the fallen security czar who is now under investigation. After his stint at CCTV, Li Dongsheng headed up the 610 Office, the Chinese Communist Party’s extralegal, secret police force used to coordinate the persecution of the Falun Gong spiritual practice.

Another, more innocent possibility for the apparent delay in the Gala is that the Chinese New Year falls on Feb. 19 next year, rather than the January of 2014.

Whatever the reason for the lack of announcement so far, Chinese Internet users were excited at the thought that the Gala may have been axed entirely.

A netizen with the moniker “northern hunter” writing on Weibo, China’s version of Twitter, said “[The Gala] is poorly done. Stop wasting money.”

Another netizen with the nickname “Feng Liu Yun Shi,” commenting on the news on Sina, a popular news aggregation site, said, “So, this year’s Gala was the last one … Watching the Gala is a waste of electricity.”